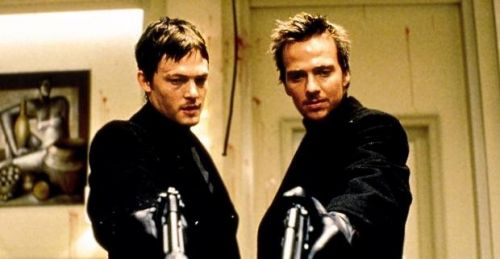 Rumors of a game based The Boondock Saints have been trickling out for a couple months, and finally the game was annonced at the Boondock Saints Video Game panel during SXSW. Although no details have been given, it was being toted as “full on co-op shooter”, which makes us all quiver with excitement.

The game is being developed by Critical Mass Interactive who want to do justice to the franchise. They hope to make it a full retail release, however it may have to be episodic as they want to stay as close to the original content as possible.  Three of the original actors have been confirmed to be doing voicework for the upcoming game, as Sean Patrick Flanery, Norman Reedus, and David Della Rocco will all be lending their pipes to the project.

Since the game was just announced, there is no better time to wildly speculate about the game. I’m going to be looking for a co-op shooter that is the lovechild between Army of Two and Stranglehold. Bullet-time, gunplay, and replace the fist bumps with rampant Catholicism and you’re good to go. I can’t wait to break all the rules and start hunting down mobsters with my co-op bretheren. Who knows, maybe there will be some Il Duce DLC that adds a third member to the team of vigilante crime fighters.  Spritus Sancti.

The Boondock Saints game is being released on the Xbox 360, PC, and possibly the PS3.