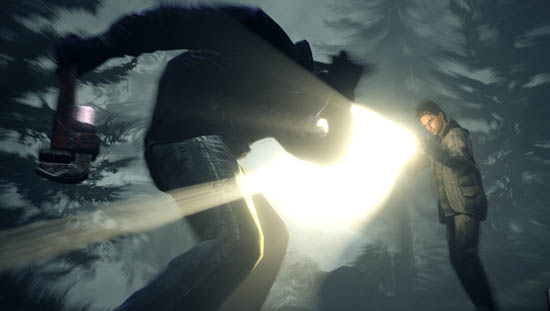 What if you were reading this review, and instead of a review, you were reading about yourself reading this review? Quite the dichotomy, isn't it? Alan Wake by Remedy Entertainment in a way poses the same predicament for the lead character who shares his name with the game's title. Mr. Wake, who is also a bestselling author, seems to have lost a period of time in his life. Unsure of what happened to the past week, he starts stumbling on pieces of a novel which describe the events that are currently unfolding in his life. Is Alan just a pawn in a novel himself? Could some sinister dark force be at work here? Or perhaps Alan is just crazy.

The strength right from the beginning of Alan Wake is the sheer character and emotion that's put into the story. Superb voice acting helps this along as Alan monologues in a tone and pace that only a bestselling author could. The story starts with Alan heading to the town of Bright Falls, Washington on a vacation with his wife Alice. You see, it's been some time since Alan has written a novel, two years to be exact. Alice thinks a vacation could help clear Alan's writer's block, and help him find inspiration for his next great literary piece. The town itself is another major character in the story, a place where everyone knows everyone else and the biggest celebration of the year is something called "Deer Fest." It's the perfect getaway from the big city life of New York. Needless to say, all Alan wants to do is get the keys to the cabin and relax with his gorgeous wife. But it isn't long into his trip before things begin to go awry. The cabin curator doesn't show with the keys, and instead Alan is handed directions and keys to the cabin by a mysterious woman in a dark diner hallway. Something is off. Upon arriving we learn Alice's fear of the dark, and from this point forward it plays an important role in the story. Alan and Alice's quiet night in the cabin is cut short when a good fight between the two leads to Alan walking out for some air. Soon Alice's screams echo through the night, and suddenly she's gone. Alan finds a broken porch banister overlooking the lake, and jumps in to save her. He suddenly wakes up a week later, behind the wheel of a car that's just been in a crash. Groggy, disoriented and with no way to find his missing wife, Alan sets out to find help.

Armed with a flashlight and a revolver, your first journey takes you through dark and dangerous woods and lumber yards to reach a gas station. You'll soon meet up with "The Taken," corrupt townsfolk who are overcome by the darkness. To dispatch these creeps you'll need to use your flashlight in combination with a weapon (or vehicle) to first break the darkness that shields them and then kill the host. Your flashlight will slowly recharge over time, but during hectic battles you'll want to pump in the limited amount of Energizer batteries you have. And they are Energizer batteries, as there is plenty of product placement throughout Alan Wake. It's one of those things that fits well within the world, and doesn't really feel too forced for with advertising.

Your quest will take you through dark forests, lumber mills, lakesides, tunnels, and farms; all making the area of Bright Falls feels like an eerily realistic setting for the horror that unfolds before you. Each locale seems to present a new danger for you, the corrupt townsfolk aren't the only thing that stand in your way along your journey. Dangerous flocks of birds and poltergeist infected farm equipment that hurl themselves at you are only a small part of the danger that crosses Alan's path. You'll constantly be on the hunt for light,  it's the only thing that can defeat the darkness. Conveniently placed generators, workshop lights, and street lamps are all your safe haven; entering them will recharge your health quickly, create a checkpoint and dispense any baddies surrounding you. Sometimes running and dodging the enemies are your only option, so these safe havens are crucial. All of this chaos of possessed towns folk, flying tires, and poltergeist infected tractors are only part of the story. Alan is not only dealing with them, he is also battling himself, battling his mind. He needs to piece together the missing week of his life, and decide what exactly is real.

Through a series of dreams and flashbacks you slowly begin to understand the relationship Alan has with his wife Alice, his best friend/agent Barry, and the darkness. The episodic format of the game further reinforces the narrative elements presented. Giving each section a beginning, climax, end and cliffhanger not only gives a constant sense of accomplishment, it drives you to the next episode to find out what awaits. Remedy licensed a nice variety of music as well to book end these episodes which helps evoke further emotion to what's going on in the game. Each episode begins with a "previously on Alan Wake" montage to bring you up to speed if you decided to take a break from playing.

I have very few quarrels with Alan Wake, the game play is solid and fun, and for the most part it controls well. You'll never find yourself fighting the camera, there's always something pretty to look at, and the contrast of light and dark from the environments will keep you on the edge of your seat. The game utilizes audio extremely well, you'll quickly become familiar with the audio queues that put you into "battle" mode and the music, both licensed and orchestral, does a great job of setting the mood. The game is a bit too easy on the normal difficulty, so you might want to bump it up if you're looking for more of a traditional survival horror challenge. I've tried very carefully to avoid any potential plot spoilers for this game, because it truly is the game's greatest strength. It unravels like a TV series, and resembles the likes of the X-Files or Twin Peaks. By the time you reach Episode 6, the final episode of the game, you'll have a pretty good idea of where things are heading - and despite what you feel might happen, what you know is going to happen, it's almost gut wrenching to watch unfold.   The unanswered mystery is the one that stays with us the longest, and it's the one we'll remember in the end.

Alan Wake is proof that video games can be the complete entertainment package. For fans of Remedy's past work with titles like Max Payne, you won't be disappointed; and keep an eye out for a a few Easter eggs related to their famous franchise. Thought provoking, emotional, and fun, Alan Wake will make you long for more titles like it.  Alan Wake reminds you why you play videogames.

Alan Wake is a single player game.  This review is part of Co-Optimus coverage in the Beyond Co-Op series, a look at games that don't contain a cooperative mode.