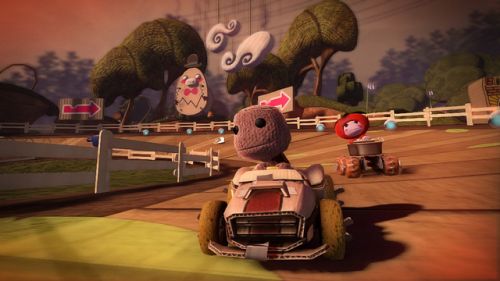 In February we reported on a rumor that Sony's popular LittleBigPlanet series would be receiving a kart racer spin-off. Co-Optimus would never steer you wrong, deer readers - Sony has now officially announced LittleBigPlanet Karting for Playstation 3. It will come from United Front Games, the makers of ModNation Racers. That revelation brings its own set of expectations and concerns, but I dare you not to be impressed by the new game's reveal trailer.

What do we learn from the trailer and announcement? LittleBigPlanet Karting features the beautiful world and art style of the LBP series, made more graphically impressive by the switch to a fully 3D perspective. It will allow for customization of Sackboys, karts, and most importantly - levels. Like the proper series, Karting allows users to create and share content with each other.

Gameplay modes consist of traditional racing and battles, the staples of any kart racer - or is that 'karting racer'? We also glimpse several minigame-like segments in the trailer, such as top-down racing and a sideview ala the main LittleBigPlanet games. This honestly looks to be the most diverse and creative karting experience ever.

As mentioned before, United Front Games is at the helm of LittleBigPlanet Karting rather than series creator Media Molecule. United Front has already shown that they can handle both the genre and user customizable content with fellow Playstation 3-exclusive ModNation Racers. However, that game had terrible loading management, a huge pet peeve of mine. Nobody wants to stare at loading screens when they're supposed to be racing (and creating). Some have expressed concern about the future of the ModNation Racers franchise now that its helmer is moving on to a different property in the same genre. They certainly tread similar ground, but I'm much more excited to see LBP Karting than a ModNation Racers 2 right now, regardless of what the future holds.

LittleBigPlanet Karting 2 will definitely include both split-screen and online play. As with our previous report, we still don't know whether cooperative elements will make the cut. It does retain the creating, sharing, and minigames of LittleBigPlanet, so I'm still hopeful. If Karting does pack co-op, Co-Optimus will make sure to share all the details.