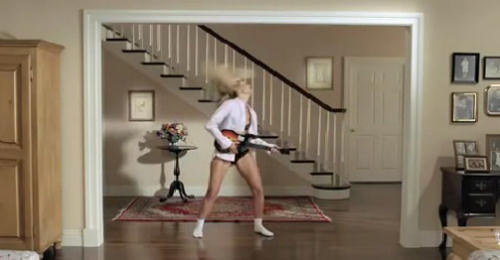 The first Guitar Hero: World Tour commercial (seen here) featured the game's new 4 player co-op feature with such stars as Kobe Bryant, Michael Phelps, Tony Hawk and A-Rod.  While I'm not one for men in PJs, the commercial does an admirable job of catching the fun to be had in cooperative rhythm game festivities.

Victoria's Secret model Heidi Klum also has a Guitar Hero commercial, though the only pairs of players in this aren't actually playing the game.  Heidi jams across the living room in nothing but her bra and panties, jamming away to some good ol' rock and roll.  Ms. Klum, if you need someone for drums, I'll be more than happy to help out.

Read on for the video, warning though, it's semi-NSFW.