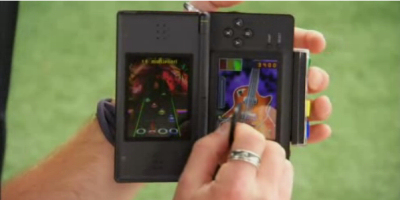 Though the focus of this review will be on the co-op aspects of the title, let's take a moment to discuss the hardware.  Rhythm games are only as good as their peripherals, after all.  Given the downright odd notion of playing a game on the go that is based on a home game which uses an almost full sized guitar shaped controller, a focus on the Guitar Grip, in particular, is required when reviewing Guitar Hero: On Tour.

I have mixed feelings about the Guitar Grip.  It certainly feels like you are playing Guitar Hero when using the Grip, and strumming on the touch screen is natural, especially with the included pick-shaped stylus.  However, comfort is a major issue when using the Guitar Grip.  I have smallish hands, and even so, I felt discomfort at best and pain at worst when playing for longer than about half an hour.  Your wrist will ache unless you keep it straight when playing, yet this means you have to hold your head at an odd angle.  Your left hand must support the weight of the DS and the Grip while your right is pressing on it all the time.  Plus, that same hand handles all of the fret buttons.  It's hard to do this for any sustained period of time.

Another gripe about the Guitar Grip: check out your hand.  See how your pinky is far shorter than the other fingers?  This makes it very hard to hit the blue button.  You will naturally want to rest only your fingertips on the fret buttons, so the rest of your fingers can help hold the DS, and yet this is impossible when you strum a blue note.  You end up moving the base of the Grip closer to your thumb to compensate.  All in all, this makes for some very uncomfortable positioning, though I expect it may get better with more practice.

Moving on to the co-op aspects, the biggest letdown is that there is no co-op Career mode.  I can certainly see why, but it's still a bit disappointing.  Co-op is easy to set up given the DS wireless capabilities, with  one player hosting and making decisions about the session, while the other merely joins in.  You can change your difficulty, character, guitar, and make other adjustments from one screen before you play.  You can choose who gets to play lead or bass/rhythm here as well.  After each song, you are kicked back out to this same screen, which can take you out of the mood a bit, though this is just a minor annoyance.

Unfortunately, playing through a song in co-op isn't much fun at all.  There is no sense of working together to rock out, unlike the home console versions.  It feels like you are merely playing a song solo at the exact same time as another person.  The biggest problem is the lack of communication.  You will probably be wearing headphones while playing, as the DS speakers aren't made for music.  It's hard to trash talk with your buddy when your eyes are glued to the screen, your hands are busy working, and your ears are plugged with headphones.

Players share a note count meter, and Star Power, just as in previous GH games.  However, activating Star Power is an exercise in frustration.  Yelling in the microphone or pressing a face button will deploy Star Power, but this is almost impossible to coordinate.  While in GH3, for example, you can tilt a guitar controller for a while until your friend gets the message, try yelling continuously until your friend does it at the same time.  After about a dozen songs, we gave up even trying to activate Star Power.  Between the headphones issue and the Star Power mess, co-op play was really quite a letdown, given the high level of co-op play seen in other games in the genre.

There's a lot to love about Guitar Hero: On Tour.  The same art style, head bangin' tunes, and tough challenge are here.  The song list is more focused on pop this time, but there are plenty of great guitar songs here too (thank you Ozzy and Skid Row).  The Grip is workable, though clearly intended for short sessions, which is probably okay for a portable system.  The co-op, though, is awful, and doesn't feel cooperative at all.  If you were looking for a great co-op experience like that of Rock Band, but on the go, you'll be disappointed.  If you're looking for a nice way to fill time with some authentic Guitar Hero style gameplay, though, you should definitely check out Guitar Hero: On Tour.

The Co-Op Experience: One player takes the lead guitar, the other plays bass over local wi-fi.