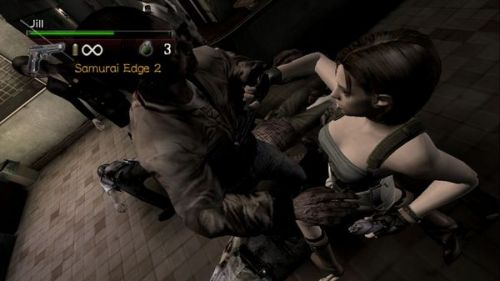 Formerly a Wii-exclusive title, Resident Evil Chronicles HD brings back both Umbrella Chronicles and Darkside Chronicles onto one game, giving you the action packed, rail-shooter awesomeness of two for the price of one.

My, my… aren’t we the popular series as of late? It’s one Resident Evil title being released right after another almost, the next game being Capcom’s upcoming PlayStation-exclusive that Move lovers will definitely want check out.

I think anyone who’s played the Wii versions of the games will probably miss the “light gun” attachments that made the game feel like we were in an old-school arcade. However, the new HD visuals and the combination of both games will make hard for anyone to not try out this remake even once, especially with the lights turned off (trust me; it makes the “shoot first, think later” gameplay that much more thrilling). Umbrella and Darkside Chronicles were also two of the best co-op games I’ve played on the Wii (IMO), forcing players to shoot together as a team to survive the relentless zombie outbreaks and uncover many of the Umbrella Corporation's secrets in a short amount of time.

I highly recommend these titles to anyone who wants to take a course in “Resident Evil for Dummies”, as the games traverse you through the main storyline of almost the entire series, spanning across from Resident Evil 0 until Resident Evil 5’s events. It’s also the perfect opportunity to play the games with sharper graphics, as well as earn multiple Trophies in the process.

Resident Evil: Chronicles HD will be landing in our hands come June of this year. However, if you’d be more interested in buying each game separately (both in HD of course), they’ll be available a short time after initial release as single downloads. I, of course, recommend them both together. But if you don't agree with me, check out some of the new screenshots below and see if that changes your mind at all.