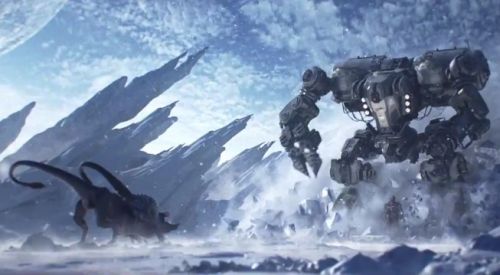 Incoming Capcom news! Lost Planet 3 was recently revealed. The follow-up to the excellent co-op adventure, Lost Planet 2, has a shiny new trailer you can check out below. I won't go into details on the video here. You can see all the ice, snow, and Akrids for yourself. I will say that the trailer has a very single player vibe, and from the details given at Capcom-Unity, the game apparently follows suit.

Lost Planet 3 will take the series back to the treacherous frozen wasteland of the first game. It's actually a prequel, taking place when prospectors first came to the planet EDN III looking to make a fortune hunting thermal energy. The story will focus on Jim, a regular blue collar guy, and his giant utility rig. Gameplay will shift between a first person perspective when the mech is in action and a third person shooter when Jim is on foot. The trailer lacks in-game footage, but you'll get the idea.

Here are a few more details on the game:

Return to extreme conditions – Taking the series back to its roots Lost Planet 3 returns to E.D.N. III, delivering a dynamic battle field that’s more dangerous than ever before with an ever changing climate that will affect the way you play

Brave the terrifying – Play as blue collar worker Jim, risking assignments in treacherous conditions to earn his hazard pay and return home to his family

Home away from home – Protect yourself from hostile Akrid and the unpredictable ice storms on E.D.N. III with your utility rig. Equipped with an assortment of tools you’ll need to learn to use the rig to your advantage in order to survive

Killer enemies – The Akrid are back, bigger and angrier and demanding a more tactical approach during combat

Reveal the hidden truths of E.D.N. III – The uncharted world has many secrets locked away. Jim’ search for T-Energy will ultimately reveal further mysteries

Did you catch that bit at the end? So did we. We sent an email to Capcom to see if the "full set of multiplayer modes" would include co-op play. They responded quickly, but couldn't confirm whether or not Lost Planet 3 would feature a co-op mode. Drag.

Obviously, we have high hopes for a good cooperative experience. Lost Planet 2 was a lackluster single player title, but a stellar co-op game. It's unfortunate that the game didn't sell very well. I hope the poor sales didn't sour the Capcom brass on co-op campaigns. We're sure to find out more information in the months ahead.