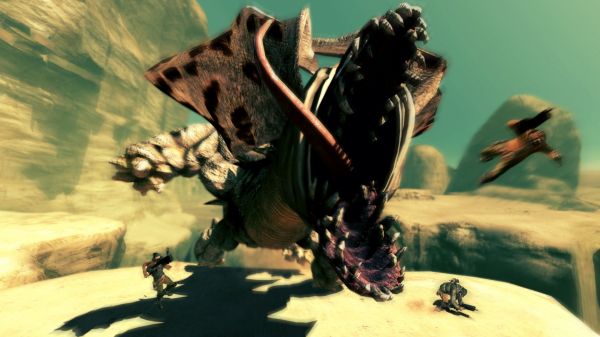 Microsoft's X10 event has provided a few co-op goodies this week, including a co-op hands-on impressions of Lost Planet 2 from IGN UK.  While the impressions piece doesn't offer too many details about the "new type of co-op" that was touted when the game was announced, it does talk about some rather interesting customization options that will be available to players, as well as briefly mentioning that there are six different factions for players to choose from for their co-op campaign.

The stage progression uses what is essentially a safety line that all of your team members must cross before you can continue to the next point in the level. These instances are followed by loading screens and a quick readout of how you're doing in the level. Lost Planet 2 grades you on how many enemies you've killed, what you've used to kill them and several other factors to establish how much experience you're given. This experience will go towards new weapons and customization options for your character. If you use the shotgun to kill a lot of Akrid, you'll earn shotgun upgrades. In addition to all of these core elements, Capcom also said that they've added more than 100 taunts, eight of which can be equipped at a time.

Sounds like there will be a little friendly competition in the levels to see who gets the most kills in order to rack up the most experience.  Hopefully those "several other factors" include some things that are based on the team's overall progression and not just a measure of who got the most spectacular kills.  Now the one downside to all that experience: it only stays with the faction you earn it with, similar to a Dynasty Warriors-type model.

The campaign mode that I was playing cooperatively is said to feature six playable factions, all of which are at war with each other. I was told that one campaign pits you against the very soldiers that you'll be playing as later in the Lost Planet 2 experience. The points you earn as one faction are unique to that group of soldiers, so if you're playing as Jungle Pirates, those experience points won't bleed into your missions as a Mercenary.

Personally, I'm curious whether the campaigns for each of the six playable factions will vary to some degree and offer new/different challenges for players.  If not, it makes one wonder when developers are going to wake up to the fact that having players replay the same stage/battle/tedium over and over again only holds interest for so long.

Finally, I mentioned some "interesting customization options" that are available to players, so here is a wonderful mental image I thought I'd leave you all with:

As customization is a cornerstone of Lost Planet 2, you'll now able to put Marcus' head on a bikini body with Wesker's legs.