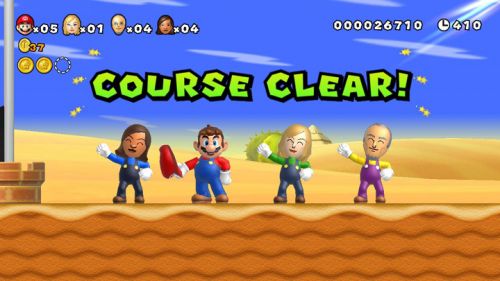 Where there is Nintendo, so will there be Mario. Just confirmed, Nintendo will be showing off a playable demo featuring Mario’s Wii U debut in a new New Super Mario Bros.

E3 is only a couple of months away, and with it we have all the best gaming developers showing off what we hope to be some great games. Looking into what might be featured, we discovered that a new Super Mario game will make an appearance, giving us co-op folk something to look forward to from Nintendo. The first ones to hear about the game were featured on a Spanish new website called El Mundo. Published in it was an interview with Shigeru Miyamoto, the godfather of Nintendo, including a paraphrase in which he stated that a new Super Mario game was coming to the Wii U and would be displayed at E3 this June. This was later confirmed by a Nintendo representative in a Eurogamer article:

In a recent interview, Mr. Miyamoto confirmed that a new Super Mario Bros. game for the Wii U system will be shown at this year's E3 Expo. This is based on the Mario experience that was demonstrated at last year's E3 Expo. We'll have more to announce about our plans for the E3 Expo at a later date.

A New Super Mario Bros. demo had been featured last year in E3, but was strictly stated that it was just a concept idea rather than an actual demo for a full fledged game. Like the New Super Mario Bros. Wii, the Wii U version included 4 player co-op, with the added bonus of letting the players put Mii heads on top of their character’s bodies instead of the Mario gang.

Check out a small video from last years "New Super Mario Bros. Mii" demo and get a feel for what we might see at E3:

While the Wii U is schedule to be launched by the holiday season of this year, a North American launch date for November 18th has only been speculation. Nintendo has yet to announce an official release date for the Wii U, so maybe they’ll state something come E3.