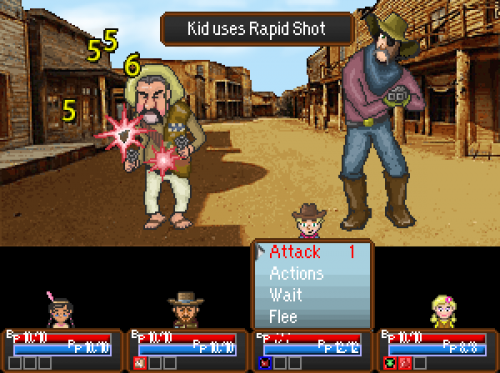 Another day, another Kickstarter.  The competition for your money continues to heat up as more and more independent studios, (even some not) move towards Kickstarter to find funding for their games.  We're currently receiving a handful of these every week asking for coverage.  So now, like you, we have to use our discretion at which ones we want to talk about.  The latest one that piqued our interest is a game called Boot Hill Heroes for Xbox Live Indie Games and PC.  It's being touted as a spaghetti western SNES style RPG with four player drop-in/drop-out co-op.  Yeah - I think we can get behind that.

There's a few items from the press release that stood out to me.  There seems to be a real focus on the co-op aspects of the game, pointing to the fact the menu system was designed so all players can have access to abilities at the same time during co-op play.  The co-op was inspired by Final Fantasy III/VI as well, and from the screens and video, it's pretty easy to see that.

If the game has a unique "hook" - it's the hat system.

On this adventure, players can find and equip various “job hats” that not only change the look of their characters but also allows them to learn new abilities associated with that job.  A “Stetson” teaches special pistol attacks while an “Indian Headdress” reveals magical support dances.  Players can then customize their characters by choosing which of these abilities they want to have
equip and build a character that matches their style of playing

The game is being developed by what appears to be a two man studio called Experimental Gamer.  This is their first foray into game development.  They are looking to raise $5000 to finish the project with rewards varying from copies of the game to having yourself as an NPC in the game to baking you a real life cake.  Who can turn down cake?