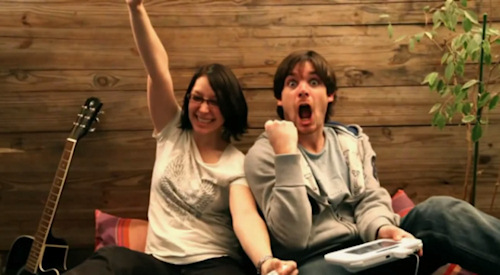 OOOOOOOOOH YEAH!  These people are super stoked to have found a nifty feature in the upcoming Rayman Legends.  Utilizing the Nintendo Wii-U's controller they are able to "scan" objects into the game to assist on their quest with Rayman.  In this case it looks like they heal each other by placing a heart shaped object on the pad, in another example we see a Raving Rabbid figure placed, and in the final tease....Ezio from Assassin's Creed.  There's absolutely 0 details on how something like this will work, but it's an intriguing concept none the less.

The co-op doesn't end there.  The video shows later action where a player can co-op with the rest of the platforming group by changing things in the environment.  In this specific example everyone jumps on a platform and the girl is able to use the touch screen to raise it so everyone can reach a higher area.  Pretty slick.

From what we can tell, this trailer has leaked out ahead of the official announcement, so there's no concrete details yet on just what is going to be supported where - but it definitely looks as if 4 player co-op, this time with online play, is going to make a return.  Most likely we'll have more details of the game at E3 in a little over a month, and Co-Optimus will be there to bring you the scoop.