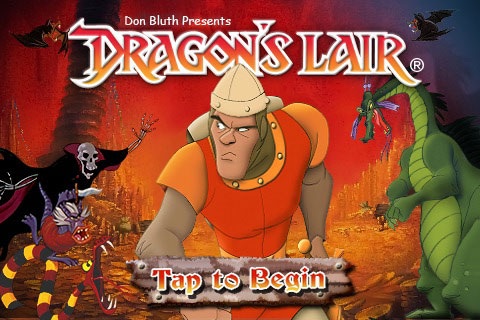 Gamers under 25 don't know how lucky they are.  When I was a lad all of this was fields and the arcade was full of games with near impossible difficulty.  A prime example of this was Don Bluth's Dragon's Lair, a spectacular looking game that was harder than Jason Statham holding a diamond tipped hammer.  Now you can relive this glorious gaming torture on XBLA from 18th April.   This time bring a pal in local 2 player co-op, but is it co-op?

Traditional co-op has two or more gamers working together at the same time, but the updated version of Dragon's Lair likes to be different.  Dirk is still the only hero on screen at any time, so how can co-op work?  Each player will act as a one of Dirk's lives, this means that if player 1 dies, player 2 jumps in to try and complete the challenge.  With Lair's notoriously high difficulty level, swapping between the two players will be common enough that neither should get bored.

Alongside the new co-op mode, Dragon's Lair XBLA is also getting Kinect controls.  Yet another slither of difficulty onto the game as you prance around the room trying to trigger that one tiny element the game requires.  If you are finding it difficult to fathom a world in which Dragon’s Lair is not only co-op, but Kinect controlled, Microsoft have come to your aid with a new trailer highlighting the new elements to the game.