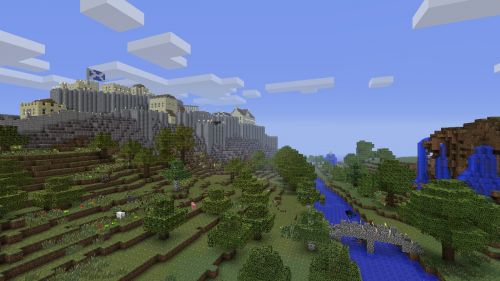 The latest Arcade Next event on XBLA has had some good co-op action in the form of Fable Heroes, but arguably the best has been saved until last.  With co-op spanning 4 player local and 8 player online, Minecraft: Xbox 360 Edition looks like the most fun you can have with 8 people when no whipped cream is involved.  Out Wednesday 9th for the princely sum of 1600 Microsoft Points, Minecraft 360 may be on the expensive side, but looks packed with entertainment.  Watch the new trailer if you don't believe me.

The new trailer highlights the multiplayer action, showing off how the various ways of playing will work - from 2 player splitscreen, all the way to 8 players online.  Whether you have your pals crammed around on the sofa, or spread across the globe, Minecraft 360 encourages friendship.  How? By only allowing you to play with people on your friends list, an attempt at avoiding grievers.

Let's hope we all have enough friends who own the game. If not, you can always go on the Co-Optimus forums and make some new ones!