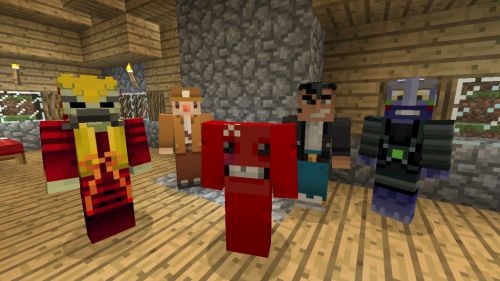 These Minecraft: Xbox 360 Edition Skin Packs cannot be stopped (not that we'd want to)! Possibly one of the biggest XBLA titles ever to be released is constantly giving players more content to play around with. This time, more character skins will be coming to console players while we wait for a title update of real substance.

To further show off our own personalities in our virtual worlds, Minecraft: Xbox 360 Edition will be releasing its second “Skin Pack” DLC hopefully in the next couple of weeks to stave off our need for our own custom skin feature. 45 brand spanking new skins will be available to be purchased and donned on your Minecraft character for everyone to stare at (it is okay to be jealous of characters skins from time to time, you know). This time around, they’ll have some XBLA game character skins to choose from, such as the ever so lovable raw meat hero from Super Meat Boy (invisible head included) and big-nosed adventurer, Spelunky. Feeling any Nintendo 64 nostalgia lately? Well, a couple of the Jet Force Gemini heroes will be available as skins as well; a sweet blast from the past. Some others included are the quad of General Akamoto from Skulls of the Shogun, The Player from Retro City Rampage, Cobalt Agent from Mojang’s Cobalt, and the entire Left 4 Dead survivor cast. Much like Skin Pack 1, this Skin Pack will be sold for another 160 Microsoft Points. Again, no release date has officially been announced for it, but it should be arriving sometime in the next few weeks.

On a side note: It’s been a while since we’ve hosted a Co-Op Game Night with our loyal readers. Much like most of you, we’ve been sort of busy with our own summertime plans that we’ve taken a small break from getting to know our readers on a more virtual level. That being said, it makes me happy to announce that our next Co-Op Night session will take place on Wednesday, September 5th, around 8 PM Central, featuring Minecraft: Xbox 360 Edition! We encourage all players to show us their personal creations that you’ve been working hard on over the past months; the best of the best may possibly make our front page! So mark your calendars, craft something big, and join us for a night of good, co-op fun. Be sure to look on our forums for future info on the event!