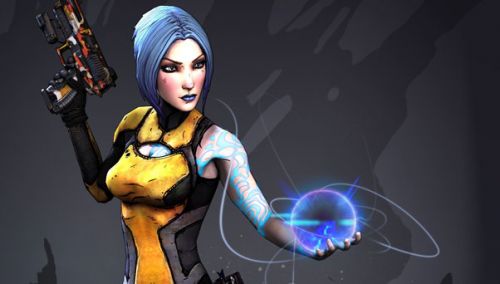 Lilith, the Siren of the original Borderlands, will always hold a special place in our hearts. Come September, however, a new Siren named Maya will emerge to forge her own path in the upcoming Gearbox title, Borderlands 2. Today, we’re taking a quick look at what types of carnage she’ll be capable of within the game.

Using her ability of “Phaselock”, Maya will be taking the place of Lilith and her “Phasewalk” powers in Borderlands 2. Instead of turning into a ghost form and reappearing on the battlefield in a flashy spectacle, Maya will be able to freeze enemies in place and slow their movements instead. In co-op gameplay, allowing teammates to focus fire down enemies that can’t fight back is a blessing, making Maya as strong as any character to play as. Take a few seconds to watch a clip from G4TV, showcasing her awesomeness:

The development team made sure to tread Maya’s “Phaselock” abilities lightly, being that there are only 12 Sirens in the whole Borderlands universe. Maya was created to be able to work just as effectively while playing solo or during co-op sessions, while still being a different take on Lilith’s character altogether (so you won't feel like you're playing the same character as before). Either way you build her, whether you want to make her solely a damage dealer or just sticking to her “Phaselock” specialties, Maya will definitely get the job done in Borderlands 2. Borderlands 2 will be arriving in stores on September 18th of this year for Xbox 360, PlayStation 3, and PC (limited edition is now available for pre-order), so be sure to stay tuned for more info on the other new characters.