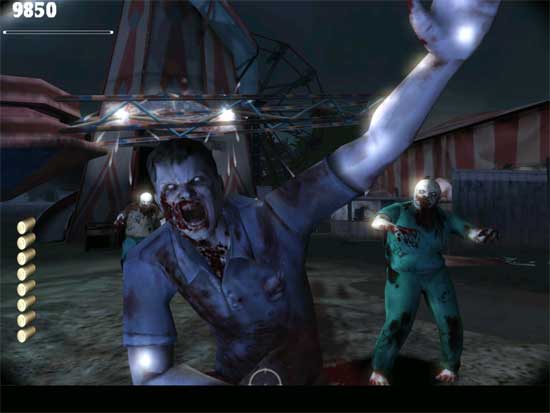 Resident Evil 5.  Left 4 Dead.  Dead Rising.  Bikini Zombie Slayers.  Even Diablo III features zombies.  I can't think of a time when the genre has been more popular.  Yet another new zombie title is coming soon, this time headed for the Wii, home of a remake of the arcade shooters House of the Dead 2 & 3 Return .  This time, though, it's not a lightgun style game, but a more action-oriented one: House of the Dead: Overkill.  Siliconera has a few details about the title.  Wagging around the remote will be featured, letting players pistol whip zombies.  Sounds like fun to me!  The protagonists of the game will have interesting abilities, like slowing down time, Matrix-style, and the Evil Eye, which sounds awesome but really just lets you see destructible parts of the environment.  A sweet, campy trailer and a couple more screenshots are also available for your viewing enjoyment.  Few details about the co-op have been revealed, though it seems likely that two zombie slayers will be able to play together.  The pistol whipping will commence when the game is released in "half a year".