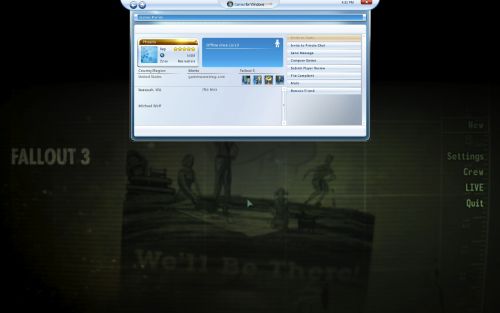 Jealous of everyone playing Gears of War 2 co-op?  There's still a perfectly suitable alternative available on PCs that supports the Live service, and guess what?  It's now got a brand new interface.

Completely redesigned from the ground up for PCs, the new interface is a welcomed change.  And while Xbox 360 owners get their update next week, PC owners can get their update right now.  Along with the new interface comes a brand new PC marketplace to download trailers, videos and content for Games For Windows games.  This is where you'll find add-ons for games like Viva Pinata and Fallout 3 - though they aren't quite available yet.

I actually had some hands on time with the interface about a month ago and walked away quite impressed.  Microsoft swallowed their pride and realized they went the wrong direction trying to copy the Xbox brothers blade system.  The new overlays are slick, easy to use, and definitely mouse and keyboard friendly.

Hit the jump for a full set of screenshots.

REDMOND, Wash. — Nov. 13, 2008 — Microsoft Corp. today unveiled significant updates to the Games for Windows — LIVE online gaming service, enhancing the service to provide an unmatched Windows multiplayer experience and excite the growing online gaming community. These compelling changes build on the foundation of Games for Windows — LIVE, which allows gamers to connect and play with their friends for free, and includes unique features such as Achievements, TrueSkill matchmaking, voice and text chat, and a single identity (Gamertag) that works across both Windows and Xbox 360.

“The online space is and will remain the driving force behind Windows gaming, and we’re taking steps to ensure that Games for Windows — LIVE provides a unique online home for PC gamers,” said John Schappert, corporate vice president of LIVE, Software and Studios at Microsoft. “This new release was designed specifically with our community of PC gamers and game developers in mind. It’s a natural next step in delivering a world-class online service for Windows gamers.”

The free Games for Windows — LIVE service is an integral part of some of the most popular and highly anticipated games on any platform:

Bethesda Softworks’ revolutionary hit “Fallout 3” will be the first to distribute premium downloadable content directly to gamers via the Games for Windows — LIVE Marketplace. “Fallout 3” is already a leading candidate for game of the year, and the complete “Fallout” story, including new quests, foes and weapons, will be available exclusively on Games for Windows — LIVE and Xbox LIVE for Xbox 360.

“Games for Windows — LIVE helps us expand the ‘Fallout 3’ universe and bring the full experience directly to gamers,” said Pete Hines, vice president of public relations and marketing for Bethesda Softworks. “Through the Marketplace we now have a no-nonsense way to deliver updates and great downloadable content. It’s really a complete package, and a great fit for ‘Fallout 3.’”