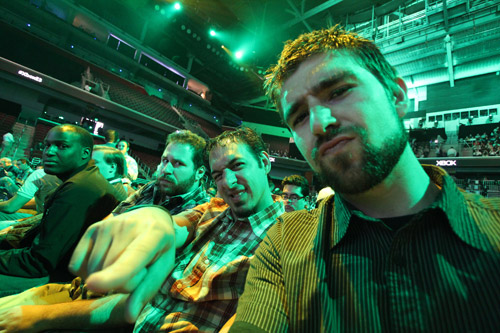 It's press conference day here at E3 2012, and we've returned from the Microsoft Press Briefing. It's defninitely a transition year, as fewer games were on display than we liked, but there were some tasty co-op previews to be had. Let's break it down.

The conference kicked off with a live action Halo  4 video, which set the story up: the UNSC has commissioned a peacetime ship for exploration purposes. Sounds great, but as you might expect, its maiden voyage is violently interrupted by a hostile force, and it just so happens to crash land on the planet that everyone's favorite Spartan ended up on after Halo 4.

While the chief tracks the ship down, he runs into some familiar foes in the Covenant as well as a strange synthetic race, which Cortana reveals to be using Forerunner technology. Combat looked good, and the presumed Forerunners have interesting abilities like teleportation and the ability to catch your grenades and throw 'em back at you.

While we don't have exact co-op details on Halo 4 yet, you can expect it to at least match up to what previous games in the series offered, though with a new Spartan Ops mode instead of Firefight.

Next up was a gameplay demo of the new Splinter Cell game, Blacklist. Sam Fisher is back, sounding a little different than we're used to (no more Michael Ironside, sadly), taking on baddies similarly to the mark & execute system found in Splinter Cell Conviction. In a new twist, Sam is able to mark and execute enemies while on the move, adding a sense of momentum.

Additionally, Sam is now channeling his inner Altair and climbing all over the dang place. The traversal mechanics look very fluid and should allow for some more interesting level designs. After the demo, it was announced that co-op would be returning, as well as the Spy vs. Mercs mode.

A short teaser trailer was shown, which basically set up the still used on the Game Informer cover for this month. Baird is clasped in handcuffs and led off while the Locust ravage a city. Not much was shown, but we found out after the show that the game is set 14 years prior to the events in Gears 1 and that People Can Fly (Bulletstorm) are developing it. Gears has been great to us co-op wise, and I have no reason to expect Gears Judgement to be any different.

Late in the show, we got a gameplay teaser of Resident Evil 6, showing off the Leon Kennedy storyline, though sadly in single-player. On display were the new combat abilities: doing a Max Payne-esque reverse dive to your back and shooting enemies from the floor, all while rolling around. It's an interesting design choice. We also got a nice long look at Leon moving and shooting, a feature long-requested of the series (and first utilized in RE: Revelations on the 3DS).

The QTE bits from Resident Evil 4 and 5 return, and the stakes look downright ridiculous. I think we saw Leon crash a helicopter through no less than three glass surfaces and a subway car. The game looks like it will be even less of a horror title and more of a straight up shooter than Resident Evil 5 was. Hopefully the co-op will be solid.

It wouldn't be a Microsoft Press Conference without a new Call of Duty game being shown off, and it's no surprise that Black Ops 2 made an appearance. We were shown a lengthy combat sequence with plenty of glimpses of the future/UAV technology the storyline is based on, as well as an example of the branching objective structure.

All we know about the co-op is that Treyarch is claiming that the game will be able to handle "twice the player count" as Black Ops did, which leads us to believe there will be at least one eight-player mode available, likely in the form of zombies.