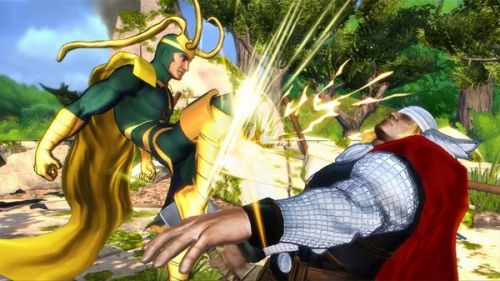 So, you’ve seen the movie and now you want to be an Avenger yourself. Well, today’s your lucky day, my fellow gamers! Marvel Avengers: Battle For Earth will be coming to the Kinect and Wii U, providing as realistic a hero experience as humanly possible.

Once again, Earth’s future is in your hands. Joining forces with Marvel’s greatest super heroes to help the Avengers defend Earth, your objective is to defeat an race of alien shape shifters known throughout the galaxy as the Skrulls. If you’re a big comic book nerd like we are, Marvel Avengers: Battle For Earth is going to be based off the storyline from the “Secret Invasion” comic books. Take this now legendary movie poster and turn it into a video game reality; you know you want to.

Ubisoft is already calling it the “ultimate” super hero brawler, as the game will feature 20 of the most popular Marvel super heroes, including super villains, to choose from.

Using the Kinect’s motion gameplay to use each hero’s unique abilities and super moves, you’ll be able to take on the Skrull threat without fear. You can also take a friend along with you for the ride, as the game will feature a full co-op campaign mode. Even after finishing the game, there will be a wide variety of game modes to keep your inner super hero satisfied. Here is some more info on the key features this game will include:

USE MOTION TO FIGHT AS A SUPER HERO: Trigger super attacks with your movements.

TONS OF BONUSES TO UNLOCK: As you work your way through the battles, you'll unlock unique outfits and collector cards.

BATTLE WITH AN ENHANCED FIGHTING SYSTEM: Use Super Attacks, Velocity Boost, Breaker, or Frenzy to beat your opponents.

Although there has not been a confirmed release date, Marvel Avengers: Battle for Earth should be arriving sometime during the fall of this year. We’re figuring the price point of this game to be around the standard Kinect title. In regards to the Wii U, we'll have to see come closer to its release in the 2012 4th quarter.