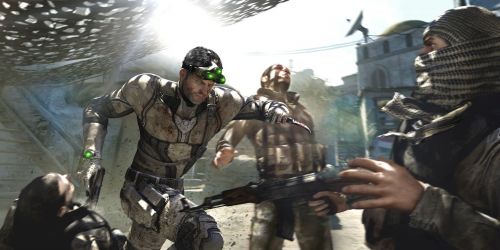 In case you missed it, one of the surprise announcements of Microsoft's Press Briefing this morning at E3 2012 was the unveiling of a new Splinter Cell game.  Called Tom Clancy's Splinter Cell Blacklist, players are once again dropped into the shoes of Sam Fisher in a game that looks to take close combat to a new level.  In it we saw the mark and execute system that was made famous by Splinter Cell Conviction, taken a step further allowing it to be utilizing on the fly and in motion.  What transpired on the screen can only be described as a blend of Assassin's Creed and Splinter Cell.

It was incredibly fluid.

More good news was the confirmation the game would feature a co-op mode once again.  There's no details as to where it fits within the story of the game, but the official product page reveals two player local or two player online co-op play will be available.  Right now the game is listed for Xbox 360, PlayStation 3 and PC.

We'll be hounding Ubisoft for more details on the game during E3 2012 this week, hopefully we can bring those to you shortly.