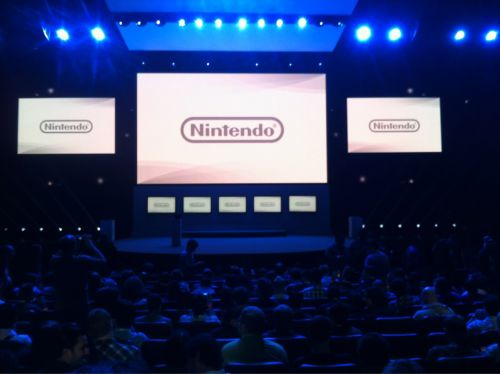 This morning I attended the Nintendo Press Conference, which was mostly business as usual as far as their press showings go, but with the WiiU coming out this fall, the bulk of the show was dedicated to upcoming titles for it. Luckily, it seems people who purchase the system will have some strong co-op waiting for them at or near launch. Let's go through what I saw.

Now, it wasn't technically announced to have co-op during the show, but we were given a glimpse at a new tactical mode that utilized the tablet controller to command four separate characters, each with their own Pikmin. It's not much of a stretch to think that this could be extended into a co-op mode, so let's just keep our ears open and our hearts hopeful.

Similar to the four-player co-op in New Super Mario Bros. Wii, this one will feature four players using Wii Remotes while a *fifth* player assists them via the tablet controller by adding platforms to the level. The added fidelity of the WiiU really made the graphics shine, and I got a really strong Super Mario World vibe from the level design we saw. This jumped right to the top of my WiiU hype list.

The latest entry in the Scribblenauts series is coming to WiiU (and 3DS), complete with the ability to create your own objects and two player co-op. We didn't get shown too much co-op play, but the crazy sandbox abilities of this series has a ton of potential.

We had a lot of fun with the co-op when this was originally released back in March, so I suspect it'll still be fun when it becomes available on the WiiU. Hopefully all of the additional content that's been released so far will be included as well.

We only saw a quick snippet of gameplay in trailer form, but I have since learned that this game was originally released in 2009 in Japanese arcase and includes 4-player co-op, wherein each player drops into a tank and fights monsters (or each other!). Crazy character customization is also a big feature of the game.

We quite liked Trine 2 when it released last December, and it should still be a rad puzzle platforming experience for up to 3 players.

Nick hated the co-op in this one, but hey, it's coming to WiiU!

I'm thinking that this game just needs to come out, rather than announcing new platforms, but our favorite oft-delayed 4-player co-op shooter is also coming to WiiU. Hopefully we'll be able to get some more hands-on time with this in the next few days. Perhaps it will get us in the proper mood to watch Prometheus?

Read this and get hyped!

There were plenty of other games announced for the WiiU, which looks to have a pretty good stable of first and third party games, though I'm worried that a lot of the third party stuff currently consists of ports of games already released for the current generation of consoles. Stay tuned over the next few days for as many updates on the above games as we can muster.