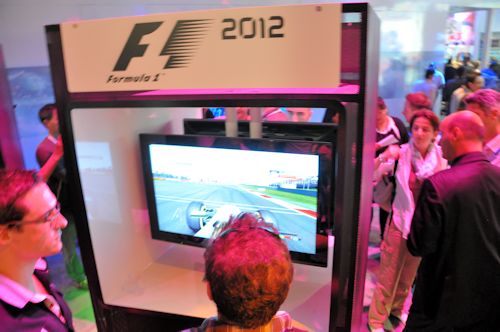 This is one of those previews that starts out with - "I know nothing about X."  I know nothing about F1 racing.  Well, other than you go left AND right when you drive, unlike that other racing sport.  So when it came time to divvy up appointments for E3, I drew the short straw to cover F1 2012 from Codemasters.

Here's what we got from our appointment - 20 tracks, 20 licensed drivers, and the first time we've seen any American tracks in the racing game.  For our demo we were shown one of these American tracks, which apparently was a work in progress, but looked just fine to me.

I also learned something, you can not brake and turn in an F1 car.  The team at Codemasters realized I'm not the only idiot when it comes to understanding this sport so they deicded to do something about it.  New this year is a driver training mode which shows you the ins and outs of F1 racing.  The game also supports numerous assists when driving like traction control, ABS, and driver line assists.  The latter was a really slick implementation of the mechanic, which shows you where to steer your car and when to brake.  When I really liked about it was not only did the colors change on the line, but the physical appearance changed providing player feedback that - yeah - you really do need to slow down

Co-Op returns again this year with both online and local play available.  So that's good news all around.  It's tough for me to judge whether F1 2012 is on the right track compared to its predecessor, but judged by itself it seems like a solid game that's trying to expand it's audience without sacrificing it's core.  That's always a good thing.