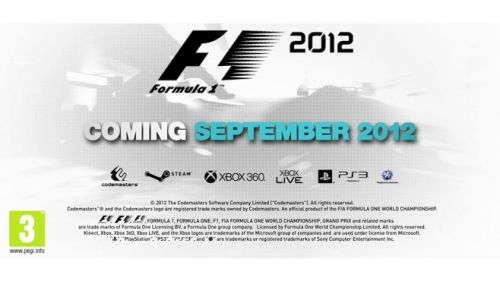 The 2012 Formula One season may have only just begun, but Codemasters are already on the fast track with an announcement that F1 2012 will be in shops for September 2012.  The previous iteration's co-op mode had more bugs than Mr Liceman the most lice ridden man in Liceington.  However, after patching the game F1 2011 co-op finally became playable and hopefully Codemasters have learnt their lesson.  To sweeten the deal 2012 promises more co-op than ever.

The game will launch across Xbox 360, Playstation 3 and PC.  Little is known about the co-op features this time around, but an enhancement to the competitive co-op that was the online championship would be nice.  All we have in terms of information is this little tease from Codemasters:

The online championship was already a pretty extensive slice of gameplay, but this should not stop Codemasters from improving on it, or at least making sure it launches bug free.  The major new feature that is being pushed so far is the Young Drivers Test Mode.  Speaking of which, check out the new promo video of young drivers talking about the game!