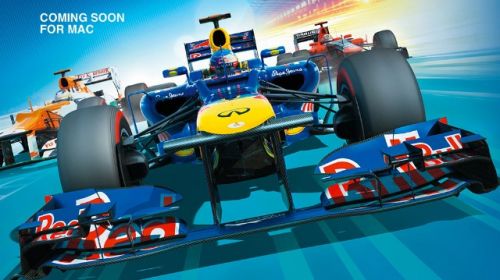 In the real world the F1 season is coming nicely to the boil, but in the F1 2012 race between platforms, Mac has come last.  The game is already out on PC, 360 and PS3, but struggling along at the rear is the poor old Macintosh.  Thankfully, they now have the competitive edge as Codemasters have revealed that the Apple powerhouse is going to have its first F1 game in over 10 years.

The Mac version of F1 2012 will contain the same features seen elsewhere; including all the latest tracks and 2 player co-op campaign:

F1 2012 offers thrilling gameplay that, in an intense and extensive Career Mode, accurately simulates motorsports’ most demanding competition. Players get to pursue a Formula One career and battle the likes of Lewis Hamilton, Fernando Alonso and Sebastian Vettel for the FIA Formula One Drivers’ WORLD Championship. They can also take on the role of race engineer as well as driver, fine-tuning their car set-ups according to the circuit, weather conditions and their own handling preferences.

In addition to Career Mode, F1 2012 features several other modes; Season Challenge condenses the Formula One season into just ten short races. Quick Race allows players to choose any car, track, driver and weather condition. Champions Mode pits players’ skills against each of the six former FIA FORMULA ONE DRIVERS’ World Champions competing in the 2012 season in events that showcase those drivers’ exceptional talents, such as Kimi Räikkönen’s prowess in bad weather.

To celebrate the series finally coming back to Mac, Codemasters have revealed a new trailer: