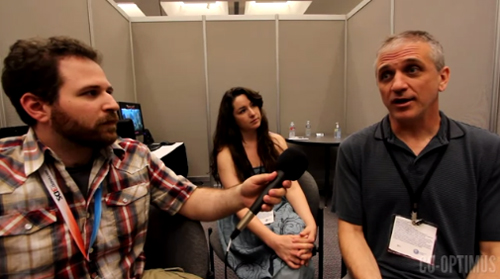 It is always a privilege to talk to Runic Games, and this time at E3 2012 we were able to sit down and play through Torchlight 2 with them. We checked out the four classes, the pets, and of course the loot and I must say that it is shaping up to be an amazingly fluid action rpg experience.

Max and Wonder from Runic sat us down in their booth and played along with us, and then we were able to pick their brains on what makes Torchlight 2 one of the most satisfying co-op experiences. I could tell by the way they played, and spoke of Torchlight 2 that they were passionate about their craft. It was really cool to be able to play through a game with the developer and the only limiting factor with the game was that we ran out of time to talk to them. We really could have sat there and played through Torchlight 2 for the duration of E3, but alas other appointments got in the way.

If you have pre-ordered Torchlight 2 you have probably already participated in the beta, which lets players go through Act 1. If you are like us, and have been playing “the competition that shall not be named” for the last three weeks straight we implore you to pre-order Torchlight 2 now for twenty bucks right now. The reason being is that Torchlight 2 is pushing the genre and does things that other Action RPGs are not.

Watch the interview below, as Max explains what makes Torchlight 2 a great co-op experience as well as how they thrive on the success of their competition. Watch after the bumper for a bonus interview with Wonder, telling us how the Runic office dog made it into the game.