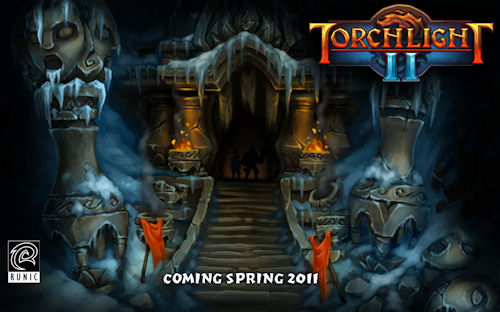 Runic Games have launched a teaser website for Torchlight 2, the sequel to last years popular single player Action/RPG.  We reviewed the game and loved every bit of it, but were sad to see co-op missing.  At last our prayers will be answered this spring when Torchlight 2 launches with full co-op support.

The game is said to boast a robust peer to peer matchmaking system for online multiplayer so that gamers can meet up and quickly get into co-op games with like minded and well suited partners.  Torchlight 2 also promises to have randomized dungeons and outdoor areas for unlimited replayability.  While the number of players in co-op isn't specified, we're going to assume it's the same number as the number of classes,  which is now four, one more than the previous title.

Beyond the town of Torchlight lies a world shrouded in adventure and mystery. Guardian-warrior Syl appears in a prophetic dream, summoning the player to the Estherian Steppes. There, you meet with the Destroyer and soon venture across the continent of Vilderan, an exotic frontier besieged by forces of evil. A discovery unfolds, that the Alchemist, following his conquest of dark ember, disappeared on his quest to defeat the unknown corrupted force responsible for destroying the mystical race of Estherians. Aided by Syl, the remaining Estherian Guardians, and clues left behind by the missing Alchemist, you will find yourself battling a powerful enemy that threatens to unravel the elements of the entire world.

Beyond all this the game still promises an improved version of its editor and mod tools, an improved user interface, continued art style of the first and more.  It sounds quite feature packed.

Right now the game is slated for a Spring 2011 release on undisclosed platforms.  Runic Games is also still working on a Torchlight MMO.