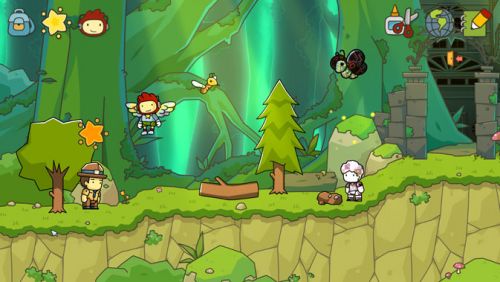 Long lines and a distinct lack of appointments given to us from Nintendo largely kept our busy editors away from test-driving the WiiU at this year's E3, but as luck would have it, our Warner Bros. booth visit included a chance to check out Scribblenauts Unlimited, the first co-op entry in the popular

For those of you who have been living under a rock for the past few years, the Scribblenauts games can be best summed up as puzzle platformers which allow you to traverse terrain and solve puzzles by summoning items from Maxwell's (he's the hero, you know) notepad. Meet someone who needs to chop down a tree? Give him an axe. Got a large gap to cross? Summon yourself a jetpack!

New to the series is the ability to create your own items, such as my personal creation, the "Dragon Surprise", a box with a dragon head which shoots bees at any hostile critter that wanders by. Created items can be saved and shared with other players, and the robust item/behavior editors should allow for a wealth of possibilities. Controlling the game via the WiiU Gamepad's touchscreen achieved mixed results. The hardware itself is a resistive screen similar to what's on the DS, and does not support multitouch. Sometimes I would have to press a little harder than I'd like to get a touch to register in the right spot, and I definitely felt like I needed a stylus to make the most of the touchscreen. Hopefully this was just a calibration issue.

Details on the co-op are slim. All we know is that the WiiU Gamepad is required, and the system can only support two of them, so odds are this is gonna be a two-player local co-op affair. The game is also coming to 3DS and PC, but we don't have much information on either of those versions... yet.

Scribblenauts Unlimited should be out this Holiday season, presumably near the launch of the WiiU.