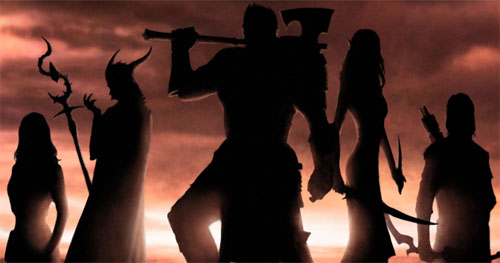 Publisher Atari and developer Cryptic Studios (developer of MMOs Star Trek Online, Champions Online, and City of Heroes/Villians) have announced development of a new co-op RPG title, simply entitled Neverwinter. Taking place in the world of Dungeons and Dragons, the game will coincide with the release of a new book trilogy (the first book being Gauntlgrym) by R.A. Salvatore as well as a tabletop RPG by Wizards of the Coast.

Little is known right now about the specifics of the game, but here's what we do know:

* Players will be able to create their own content (e.g. quests and storylines) through a system currently code-named the Forge

* The story will take place in the city of Neverwinter, where it sounds like a whole lot of bad things are happening: "Once a bustling location, Neverwinter has faced a great many disasters in the past hundred years. Rule of the city remains unclear following the unfortunate demise of the last Lord of Neverwinter and factions still battle for dominance after the all-consuming Spellplague took a high toll on the population. Even Neverwinter’s dead are beginning to rise from their graves and march upon the city they once called home."

We'll keep you guys posted as we learn more. Neverwinter is due to release Q4 2011 on PC.