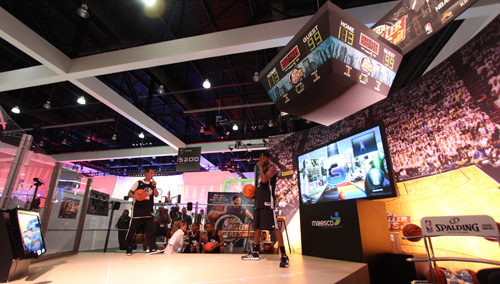 Nick, Mike, Andrew, and Locke took some time on the last day of E3 to check out the latest and maybe the first sports rhythm hybrid game, NBA Baller Beats. Each of the Co-Opticrew had their chance with the rock to show off their musical basketball skills as they dribble their way to well...just watch and see.

NBA Baller Beats is an Xbox 360 exclusive that utilizes the Kinect to read your movements as you try and keep the beat of the song using a basketball. It features over 30 tracks spanning all varieites of music, where you will have to rely on crossovers, pump fakes, and your timing to dribble your way to a high score.

While the game doesn't have a traditional co-op mode, it does support up to 8 players in a party game like atmosphere where people switch in and out of 30 second song bits.  We figured since we had the video footage, this would make some excellent E3 2012 bonus content.

Check out the video below that showcases our time with the game.