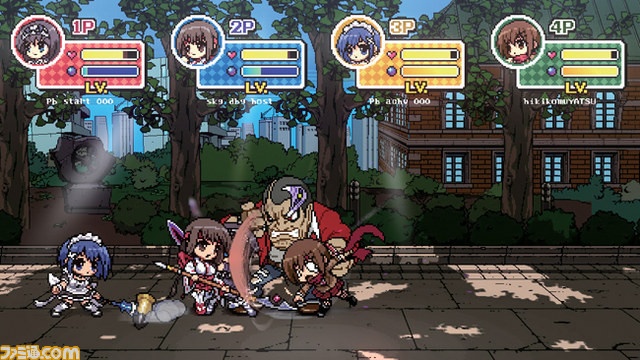 Phantom Breaker, the anime-style one-on-one fighting game from 5pb (makers of co-op import Bullet Soul) is due for a western release this fall. It seems 5pb likes all kinds of fighters, as the follow-up game Phantom Breaker: Battle Grounds will be a side-scrolling beat-em-up. Such games usually benefit from 2-player co-op, but Battle Grounds goes above and beyond the call of duty with both online and offline 4-player co-op. A Battle Royale versus mode will round out the multiplayer offerings. Not too shabby!

We don't know too much more about Battle Grounds other than it features super-deformed (tiny) versions of characters from the original Phantom Breaker. The delightful art style is certainly remeniscent of Scott Pilgrim vs. the World - never a bad thing. The fighting also takes place on two separate planes, not unlike Guardian Heroes. If Battle Grounds contains even half the charm of those two illustrious beat-em-ups, it will be a must-own for genre fans.

Phantom Breaker: Battle Grounds is scheduled for release on Xbox Live Arcade sometime in 2013. Co-Optimus will have more details soon!