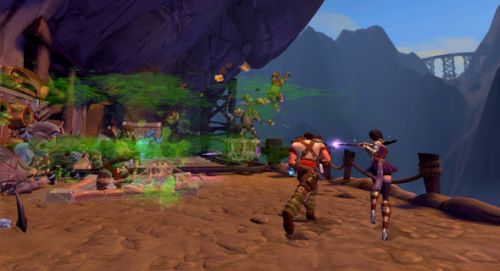 It was just the other day that Andrew was lamenting that July looked quite barren for co-op gamers, with Anarchy Reigns being delayed until next year there wasn't much else on the release schedule, well, except for THAT indie game.  It looks like Blue Shield Alliance is about to get a buddy on the calendar as Robot Entertainment have announced an official release date for their co-op tower-defense like game, Orcs Must Die! 2.

Just squeezed it in there.  Here's what Robot says about their game.

Orcs Must Die! 2 thrusts players and their friends back into battle against a terrifying mob of orcs and other monsters. With a redesigned spellbook, players will have a broader range of options to build a deadly arsenal of defenses. Investing hard-earned skulls in an enormous new upgrade system will allow players to cater to their favorite methods of burning, grinding, tossing, or dismembering orcs.

Orcs Must Die! 2 begins days after the ending of the original game. With the rifts closed and the magical Order dead, the War Mage finds himself suddenly thrust into a new battle against the mindless orc mob. He has a powerful, if questionable, new companion in the Sorceress, an ex-War Mage responsible for the destruction of the Order.

We played it at PAX East and really enjoyed our time with it.  You can read our impressions here.

Orcs Must Die! 2 features two player online co-op.  It'll be available exclusively on the PC.  If you own the original Orcs Must Die! you'll unlock exclusive content in the sequel.