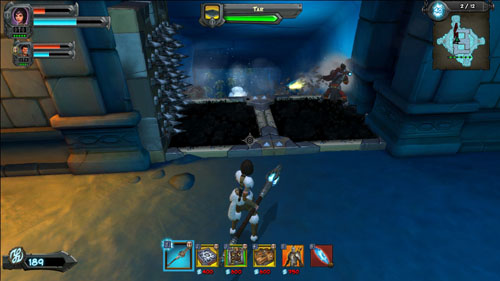 Orcs Must Die! 2 received its third booster pack at the very end of last month. Entitled “Are We There Yeti?” it packs a very similar amount of content as the other booster packs. The folks at Robot Entertainment generously hooked us up with a couple of review codes, so I got to sit down with the newest OMD2 DLC and give it a whirl.

Are We There Yeti (or AWTY, as I’ll abbreviate it for this article) follows a very similar formula as the other previous booster packs. It comes complete with three new campaign levels, three new endless levels, new enemies, new costumes, and new orc-killing gear. The campaign and endless levels are of course both available for play in single-player or co-op, with the campaign levels being Defend the Yeti Den, the Hive, and Chilled Cavern, all with an icy theme as is fitting. The new endless levels are Passages, Chilled Cavern, and the Tower. Endless Chilled Cavern is the same map as Campaign Chilled Cavern, while Passages and the Tower are taken from previous campaign levels. The new maps are laid out well, as I always find of OMD2, and again lend themselves more towards being completed in co-op (each player often finds himself or herself taking a certain side of the map for much of a wave). The new levels come with new enemies, in true OMD2 fashion. This time it’s Yetis (thus the name of the booster pack!) and Goblin Sappers. When the Yetis take a certain amount of damage, they will enrage which gives them access to a charge and the ability to leap over obstacles. Instead of damaging nearby traps when they explode, the new Goblin Sappers will temporarily disable nearby traps. This can turn into a nightmare as a huge wave of mobs runs by your killbox unscathed.

So what about the new gear? There is one new trap in AWTY, called the Spike Wall. Upon activation it springs out and knocks orcs back while damaging them with spikes. I personally didn’t find it fit into my own playstyle, but I don’t doubt that some people will be huge fans. It seems like a much more reliable Spring Trap that’s placed on the wall instead of the floor. The new trinket is the Guardian Trinket which has a passive effect of regenerating the health of guardians and an active effect of resurrecting them from death. My co-op partner and I really, really liked this new trinket, as it made us feel that it was again viable to bring guardians. Previously we’d abandoned them because they kept getting killed, and we’d sometimes have to wait a couple waves for them to resurrect - which felt like wasted gold for those waves. The Guardian Trinket helps immensely with this, and we found it to be a very welcome addition. Last, the new weapon in AWTY is the Dwarven Missile Launcher which does splash damage and knocks smaller enemies back. It seemed extremely powerful, and to balance that each attack costs some mana. My co-op partner loved this new weapon a lot, stating that it made the game “even more fun” for him. All in all, AWTY was about what I expected of an OMD2 booster pack, which certainly isn’t a bad thing. I always welcome new gear to play with, I have a soft spot for new costumes to work my way towards, and I always appreciate new devious levels to conquer. If you liked the previous booster packs AWTY is just up your alley. Also, perhaps if you’re a fan of puns as well!

The Are We There Yeti booster pack is available on Steam for $4.99. It requires the base game, Orcs Must Die! 2, to play, which supports 2-player online co-op on the PC.