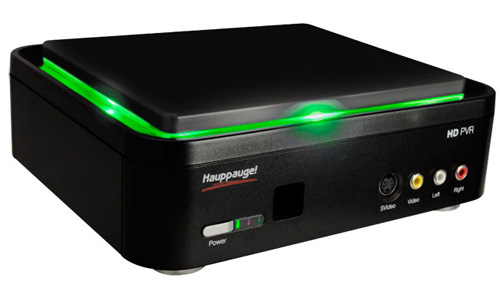 In this day and age of the internet we all know that video content is king. Making quality videos requires some form of video capture, and for the past couple years we have turned to Hauppauge for all our game footage needs. We had a chance to take a look at two of the latest products from Hauppauge, the HD PVR Gaming Edition and the StreamEez video broadcaster.

The HD PVR Gaming Edition features a new sleek black design with green LEDs running along the outside of the box. Each Hauppauge PVR can capture game footage at 1080i and the Gaming Edition is no different, as it is built for high performance, high quality video recordings. It comes with a dual component cable that is compatible with both Xbox 360 and PS3, so there is no more cable swapping when you need to switch consoles. Finally, the my favorite new feature is the no delay pass through so that the capture does not affect your gameplay in any way. The other piece of hardware that Hauppauge has coming in the pipeline is the StreamEez. This small yet powerful device will allow you to stream HD video with ease, as all of the encoding and formatting is done inside the StreamEez box. It connects to an HD video camera via HDMI or component and beams the stream straight to a service such as UStream or Justin.TV. This is perfect for live broadcasts, events, and all sorts of shenanigans gamers get up to that must be shown to the world.

The StreamEez is based on the same technology as the HD PVR and is designed to make setup and take down fast and easy, perfect for something like MLG, EVO, or your local LAN. Hooking it up is easy and requires only a USB cable and a computer, making the the StreamEez one of the best ways to get your live feed up and running with minimal hassle and excellent quality.

Look for the StreamEez later this year, which will be priced around $299.