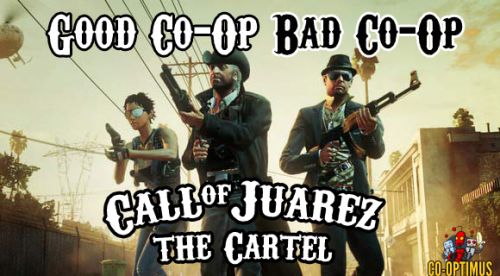 Episode 8 of Good Co-Op Bad Co-Op has the team in an exciting game of cat and mouse as they exit the gentlemen's club and chase down a wanted fugitive to shake him down for some information.

Good Co-Op. Bad Co-Op is a tale of two three friends who love playing games together. After taking a break from from killing insects in Earth Defense Force: Insect Armageddon in the last season, our co-op friends are ready to try their hands in another game - Call of Juarez: The Cartel.

We have increased the roster this season and we are proud to introduce our guest host hp1703, the bringer of snacks, friendship, and awkward touching. Returning for another season is the man who breaks puzzles instead of solving them, Sunflower. Rounding out the trio is the most fashionable lumberjack - Locke.

We hope you enjoy watching this episode as much as we had recording it. The game is a true specimen of great co-op.