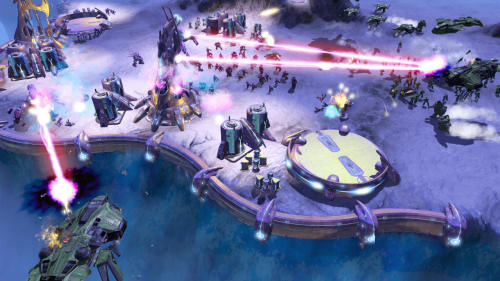 As the fall gaming season begins to wind down, the co-op specific news seems to be dwindling.  Despite a solid holiday season of awesome cooperative titles, next year looks to be just as good with games like Resident Evil 5, Aliens: Colonial Marines, and Halo Wars making an appearance.

Microsoft has released four new screenshots of the two player co-op RTS Halo Wars, and they are as tasty as ever.  It's easy to see how many a Halo fan will want to get in on this.  In fact, Joystiq was lucky enough to get some hands on time with the game, and they came away with mostly favorable impressions.  Yes, they were even impressed with the controls.

Read on and gaze at the four new screenshots.