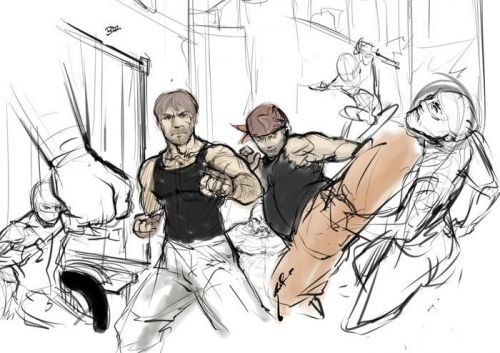 Remember Bad Dudes, the arcade beat-em-up/platformer that once went toe-to-toe with Double Dragon? The folks at newly-formed Pinstripe Games do, and they've even got plans for a sequel. The best way for small developers to resurrect a classic franchise these days seems to be Kickstarter, and naturally that's exactly where Pinstripe has turned to finance the sequel. nvisions Bad Dudes 2 as "another over the top action game to play with their friends, one with a self-aware sense of humor." Sounds like a lighthearted spin on the original, in which only a couple of New York brawlers were qualified to rescue the president's daughter from an army of ninjas. Promised features include 2-player online co-op, a variety of weapons, and zany environments.

So far, Pinstripe has released a piece of concept art and a sprite design to show fans they're serious about the sequel. The former looks nice and captures the feel of the original game's NES box cover quite well.

As for the sprite, you'll notice protagonist Blade is getting on in the years. For some reason, they've chosen to age both dudes as if they were just now filming a live-action sequel with the original stars. I'm not sold on that take, as I believe most of us would rather be like the 1988 characters rather than past-their-prime versions. In any case, better to see Blade and Striker back in some fashion than not at all!

What do you think of the project, guys? if you're anxious to learn more about this potential Bad Dudes sequel, stay tuned for a full Co-Optimus interview with Pinstripe Games.