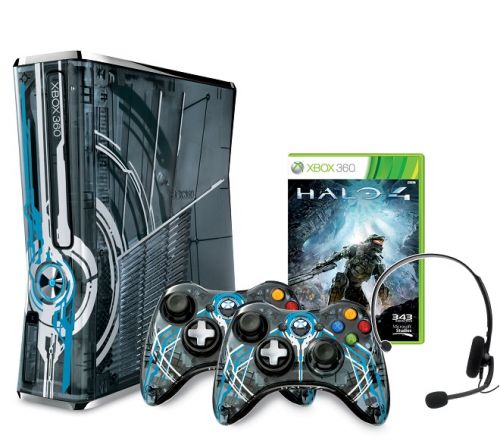 Those that attended the San Diego Comic-Con were shown a future Halo 4 Limited Edition console bundle, a great way to congratulate Master Chief’s return to the series.

The bundle is now available for pre-order, arriving in retail on the launch of Halo 4 the game on November 6th of this year. It includes a custom skinned console with two matching controllers, all inspired by the game’s legendary Forerunner technology, a copy of Halo 4, a wired headset, a gigantic 320GB hard drive to store all of that multiplayer data, built-in Wi-Fi capabilities, and Xbox Live codes for exclusive in-game and xbox avatar DLC. The “cherry on the cake” is the ring that lights up on the console, showing off a glowing blue to compliment the Halo 4 themed platform.

Aiming to be “the” console bundle of the year, this limited edition bundle comes at a great value, especially for those die-hard Halo fans who want to show their off their inner fanboy. In total, the Xbox 360 Limited Edition Halo 4 bundle will come at $399.99 USD. But wait, that’s not all! Along with the limited edition bundle, Microsoft and 343 Industries have announced a new Xbox 360 Limited Edition Wireless Controller. The artwork included on the controller will show off a gray, see-through body with the UNSC emblem stamped on the handle. The controller will come with a featured Halo 4 blue glowing Xbox Guide button (in the same style as the console) and an exclusive Xbox Avatar T-shirt DLC code. The controller will be out a little bit before Halo 4’s release date though, on October 21st, at a $59.99 USD price point. Now you’ll have something to show off while waiting outside at the midnight release.