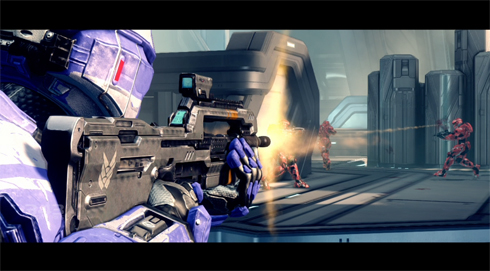 Game Informer put out a nice article about Halo 4 in their May issue, however, it stirred up a bit of concern on the internet. One of the bullet points that shocked us the most was that Firefight, the 4 player co-op mode from Halo 3: ODST and Halo Reach was dropped. For many Co-Optimus readers, Firefight was their favorite part of both of those games. 343 have heard our outcry, and they've addressed Firefight in the latest Sparkast.

Mighty strong words there, David. The team goes on to explain a few details of Spartan Ops. The mode will be composed of a new CG video and new story based-missions every week with objectives for the players to complete. The current Firefight mode often turns into more of a competition where each player fights for kills to achieve the highest score, but 343 think that by adding objectives to the mix, Spartan Ops will promote teamwork more than Firefight ever did. They also clarified that any progress made in the Campaign or Spartan Ops directly carry over to the PvP multiplayer. This should help newer players who aren't sure if they want to participate in PvP, by allowing them to build their character and unlock weapons before taking the leap to PvP.

In related news, Frank O'Connor and Kiki Wolfkill appeared on the Conan O'Brien Show to talk about Conan's role in Halo 4. There's no real information to speak of but it's a good laugh. The video is embedded below.