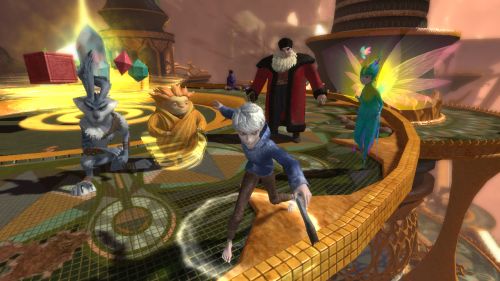 You know what you really need? More movie tie-in games! Rise of the Guardians: The Video Game has got you covered! Rise of the Guardians is based off the upcoming Dreamworks film of the same name. Childhood fantasy characters like the Tooth Fairy, Santa, and the Easter Bunny take up arms and go to war against Pitch and his evil nightmare creatures. Think I'm making this up? Check out the trailer to see a tatted-up, swashbuckling Santa.

Maybe Santa can make a cameo in the Expendables 2 game.

I had some brief hands-on time with the game at E3, and it wasn't half bad. It's a simple action game with some role playing elements.  Smash your enemies, upgrade special powers, and smash your enemies again. Levels are based off of each character's theme, like the North Pole for Santa.

Rise of the Guardians: The Video Game supports four player local co-op, allowing players to swap between AI controlled characters on the fly. It will launch on November 20th on the Xbox 360, PlayStation 3 and the Wii.