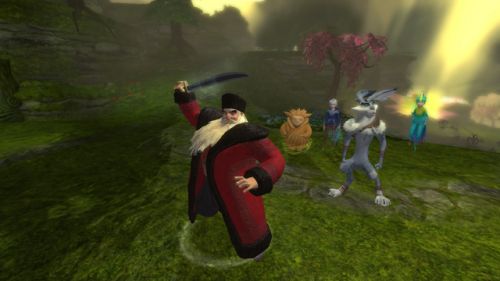 Rise of the Guardians, not to be confused with Guardians of Middle Earth (boy was I embarrassed), is an upcoming DreamWorks animated film featuring the voice talents Hugh Jackman, Alec Baldwin, Jude Law, Isla Fisher and Chris Pine. I have no idea if any of the actors will be appearing in the game.  I do know that Santa is sporting "Naughty" and "Nice" forearm tattoos. You can see for yourself in the box art. In the film, childhood icons such as the Tooth Fairy, the Easter Bunny, and Santa Claus confront the Boogeyman in what I can only assume is an ultra-violent battle to the death. Or not.

Judging from the new screens, the film will be disappointingly family friendly. That's okay. We can't have blood and guts in everything, or else we wouldn't be able to appreciate all the blood and guts. The game will feature four player drop in/drop out local co-op. You'll be able to level up your characters and learn new powerful attacks. Rise of the Guardians will appear on the Xbox 360, PlayStation 3, and Nintendo Wii on November 20th.