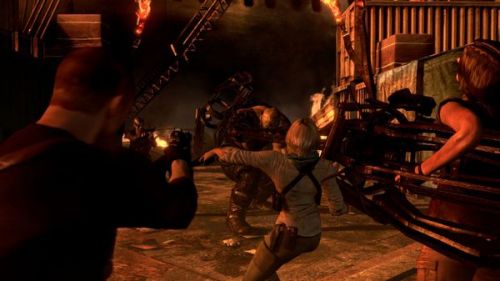 Three new videos for Resident Evil 6 have hit the internet. Each one focuses on one of the three converging campaigns. Chris and Piers are searching for an invisible enemy. Leon and Helena traverse a dark subway tunnel. Jake and Sherry team up with Leon and Helena and do battle with the freakish Ustanak. It's solid gameplay footage that seeks to capture the mood of each storyline.

Resident Evil 6 director Eiichiro Sasaki provides some bonus commentary on each video through the RE6 Youtube page. The first video is from the "Poisawan Inner Area." Chris and Piers take on a Predator-like snake. I bet Chris is glad he's been hitting the gym.

Do you think Chris would ever shut up after this fight? "Piers, I don't know if you saw it back there, but I just out--muscled a 40 foot long invisible snake. NBD."

Sasaki has a more intellectual take on the scene:

Some people might say that the more people you have with you, the less scary the situation is because you feel safer. Chris and Piers are accompanied by an entire squad of counter-bioterrorism specialists who should be the ideal allies in this situation, and yet even this cream of the crop are picked off one by one by unknown horrors. That's what this part of the game is all about, the escalating fear you feel as your team grows smaller and smaller. It's a kind of terror you can only experience in a group scenario...

...Even an unseen enemy makes noise as it moves, knocking over tables or crockery, for example. Those ordinary noises become associated with the enemy. So when you hear something like the rustle of a rubbish bag being kicked out of the way, even though it might well have been one of your team members, your heart leaps as you wonder whether it's an enemy coming to get you.

I highly recommend playing the game at high volume or on headphones to get the best audio experience.

The next video follows Leon and Helena through their terrifying subway tunnel experience. One of the first things I noticed were the zombie silhouettes on the wall. That's good, I guess, since that's what Sasaki was going for.

I really want to know if I can pull that ax out of that zombie at 1:34 and just go nuts on everyone. Sasaki goes on to explain how this was an early stage in the development process. He doesn't mention anything about being able to wail away on other zombies with an ax, which is a shame.

This was actually one of the first three stages we created two and a half years ago... This was at a time when we were trying out different things in terms of technology and direction.

With this stage we wanted players to experience the fear of walking through the darkness. Light and shadow play a very important part. The initial concept was a scene in a curved tunnel with a large crowd of zombies at the far end, lit so as to be visible only as silhouettes...

...Another thing about this scene that's quite interesting is something we call "scare lighting". I'm sure you've all sat in the dark and shone a torch on your face from below for that scary effect. We wanted to reproduce this effect in the game, so there is light shining up on the zombies and making them look scarier. It's not "realistic" in the sense that, unlike with Leon's ear-light and other environmental lighting, there is no actual light source underneath the zombies in the tunnel location, but I think it produces a great cinematic effect that works well in the context of the scene

This last video is what we've all been waiting for: four player co-op. Jake, Sherry, Helena, and Leon all take on the Ustanak, a formidable creature which can incapacitate three players with its claws and weird backpack-cage-contraption.

I know this is demo footage designed to show off the boss, but I really hope we have heavier firepower than simple pistols. Small arms fire seems to only make the Ustanak angry.

This stage provides a great example of Resident Evil 6's crossover mechanic, with up to four players teaming up to take on a seemingly unstoppable foe, the Ustanak...

...Of course, players can help each other out if they get captured by Ustanak, but they have to get up close to him in order to rescue their allies. Getting near greatly increases the danger of him killing you, so it's a risk you have to take for your team...

...The point of including this mechanic was to increase the stakes not just by requiring players to risk in-game death to beat the enemy, but to help their friends as well. This makes players feel more heroic and they can feel great satisfaction from helping others out.

Another great feature of crossover is partner changes. Certain situations in the game will put players together with someone other than their usual partner. In this stage, Leon teams up with Sherry temporarily, and Jake with Helena. It's a chance to experience some unique teamwork.

We still don't know exactly how these crossover moments will work. Will we be able to play with people from our friends list, or be forced to play with strangers (or worse, AI)? If these crossover portions don't have their own lobby, anything is possible. This could work out very well, but I see the potential for a disaster. Trying to time a meet-up with two friend may be difficult, if not impossible. Of course, crossover levels may have their own four player lobby, which would make things much easier. I hope we have as many options as possible for co-op. We'll find out when the game launches on October 2nd for the Xbox 360 and PlayStation 3.