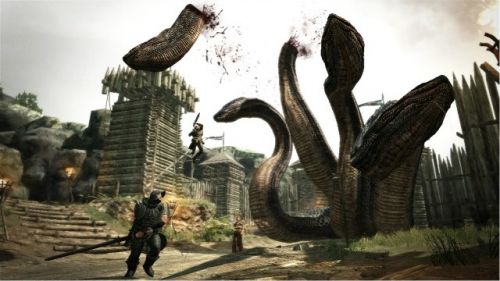 Scheduled for a May 22nd launch of this year, Dragon’s Dogma is looking to provide a small sample of Resident Evil 6 within it and give us a taste of Capcom's most anticipated title.

Come March, Xbox 360 users will be able get their hands on the demo (via code) first before PlayStation 3 users on September 4th. Official statements from Capcom state:

Purchasers of the Xbox 360 version of Dragon's Dogma will be able to redeem this token and download the Resident Evil 6 demo globally on the Xbox LIVE Marketplace for Xbox 360 60 days earlier than any other platform starting on July 3.

While the idea of wanting trying out a demo after seeing Resident Evil 6's trailer seems obvious, why else would we buy Capcom’s early summer title? Simple: it’s breathtaking in every way possible.

Take a look at the 2011 E3 trailer here and see for yourself:

All of you Skyrim lovers out there should be excited to get your dragon slaying on once again (if you've put down your controller since, of course). Just thinking Shadow of the Colossus plus Lord of the Rings could be a good way of looking at the game's concept, but that probably wouldn't do the game any justice. Already, Dragon's Dogma is shaping up to be the next major title of the decade, having the game designers from Resident Evil 4 and Devil May Cry being the soul behind it. Who wouldn't be excited for this?

While Capcom hasn’t officially announced Dragon’s Dogma to include multiplayer additions, an interview with Capcom representative, Shawn Baxter, mentions multiplayer very subtly. Until then, we'll keep a close eye out on any information we find and looking forward to recieving our Resident Evil 6 demo codes come this May.