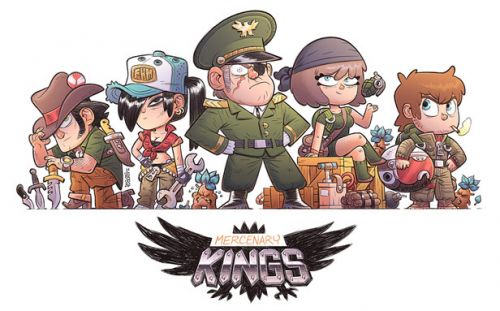 The success of Scott Pilgrim vs. The World: The Game since its release has been phenomenal. It would sounds like a no brainer to make a sequel to this game, right? Well, the game to follow it up isn’t quite a Scott Pilgrim sequel, but close to it. Mercenary Kings, another 2D action title from the guys that brought you Scott Pilgrim, want to bring the amazing, old school, pixelated graphics right back into the limelight, but only through your help can they make it happen. The people that brought us Scott Pilgrim vs. The World: The Video Game are currently working on making their next title another big hit among fans, and have gone to them directly for financial support of their next endeavor. They recently began a Kickstarter funding project for their newest game, Mercenary Kings, which has instantly caught our attention for a promising, co-op related experience. The background for the game’s story is as follows:

You play as King, the most skilled mercenary on Earth, and you are sent to an island located in the Central American Pacific Coast to smash a ruthless criminal organization that assassinated your former team members. Your mission might be to save the Earth, but your own motives are to uncover the truth behind their intricate conspiracy and to get revenge for your fallen comrades. You'll need skills, a sharp eye and lightning-quick reflexes. However, you won't stand a chance if you charge blindly. You'll need to be methodical and well prepared. That’s why your backup is the world’s best experts, ready and at your disposal to help you gear up for any mission. The Gunsmith can craft firearms of choice and upgrade your body armor, the Knife Expert can build deadly custom knives, and the Shopkeeper provides you with all the supplies you’ll need.

The game will features platforming action at its finest, providing a vast and compelling crafting system to allow players to create unique weaponry to suit their personal playing styles, or to compliment a specific mission type. Each and every part of a weapon in this game will be customizable in some way, adding different attack alterations for various effects. Enemies drop materials to create these weapons, all while driving players to accomplish a plethora of action packed storyline missions.

Most important of all, Mercenary Kings will be focusing on mostly co-op related elements, some of which made Scott Pilgrim one of the better XBLA titles of the year. The game will include a 4 player co-op mode and will only be available for PC, for the time being. Depending on how much support their Kickstarter funding gets, the developers will very much consider porting the game, with online play included, for other platforms (look out XBLA!). Here are some of the main features that Mercenary Kings will include if it makes its minimum Kickstarter milestone at $75k (Please note that 4-player online co-op mode, among many other features, will be inlcuded, at $175k):

- 30 to 40 missions taking place on a paradise island under siege.

- 4 color palettes for the main character

Now, you might be asking yourself, “If Scott Pilgrim did very well for itself, why do they need Kickstarter to make Mercenary Kings happen?” , and that’s a perfectly understandable question. Needless to say, the developers want to do more than what Scott Pilgrim did, but they’ll need our help to make that happen:

This time, with Mercenary Kings, we want to bring our craft to the next level and develop a game to the full extent of our ability. In order to achieve that, we need a budget that will allow us more resources and a slightly longer production cycle. A solution could be to obtain funding from a publisher, but these kind of deals are hard to find and can be restrictive on the creative side. This is why Kickstarter seems like the ideal option for us. It would allow us to fully realize our vision while being able to get feedback from people who support us.

Even if it’s a $1 donation, support their cause and give a developer who’s already proven to make good co-op games a reason to keep on doing so. You have our unwavering support, Mercenary Kings!