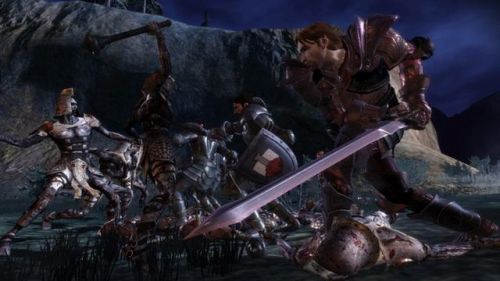 Speculation has been surrounding a Dragon Age 3 survey that popped up on the internet last week, which reveals a couple interesting pieces of information about the design of the next fantasy Bioware title. Most interesting for us and co-op fans alike, there was a question that asked if people wanted to see co-op in the game. Dragons? Wizards? Co-Op? Yes please...

Unfortunately the survey is not official so we don't know if it is real or fake, but hey since we're on the rumor train let's dive into a pool of conjecture. Even though Electronic Arts has not officially announced the game, the survey reveals a summary of the game's plot and questions people on what they enjoyed from the previous Dragon Age games. There were a number of pictures that looked like possible companions that you could get in the game, but it is tough to say at this point if they are going to appear in the game. However, what is more interesting to us is the thought of co-op in the game where your friends could take control of your party members. The Dragon Age series is without a doubt a single player experience, but it would be interesting to see how Bioware could adapt the game to include co-op play. The combat is a no brainer, especially if it is action-focused like Dragon Age 2. The story is the challenging part since the game relies on dialogue options and exploration, there needs to be careful design choices on how co-op would work throughout the game.

Again, nothing has been confirmed so we're not adding anything to the database. Heck, the game hasn't even been announced yet so everyone can settle down. If you're passionate about co-op and want to see it in the next Dragon Age, maybe it is worth sending good ol' Bioware a message and letting them know how you feel.