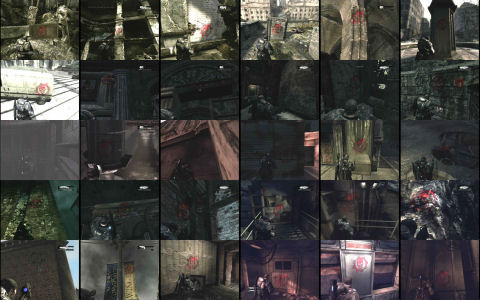 Despite blood and gore, Gears of War could be a great game to co-op with your wife.  As our next feature in our Co-Op couples articles will show you, you just need to concentrate on something different.   Read on to find out how a little achievement for collecting 30 CoG tags in Gears of War prompted multiple play throughs of the Xbox 360 title for one member and his wife.

Gears of War, the game that started it all for the wife and I.

A bit of the back story first. I played games for years on a PC and my wife hated it. Sure I was very "fond" of my PC but did that make me a bad husband? I didn't think so, but hell hath no fury like a jealous wife. She only saw my PC as an enemy that sought to come between us and she was not going to go down without a fight. Fast forward a few years and I find myself sitting on a couch with my wife and we are playing Gears of War.

How did this happen? Let me explain; no, there is too much, let me sum up. I took a chance that money spent on an Xbox 360 and a game with something called "split-screen" might end up being better than the police eventually finding what was left of my charred body buried in the back yard.

I wasn't sure about it at first, but I'm glad it worked!

When I purchased Gears of War, I was not sure if the wife would even like playing it. She said the worst thing about my previous gaming habit was that she couldn't participate. Of course all I could think of was the last time she had stood behind me during a binge session of Unreal Tournament 2004 and she said that all that movement on the screen was giving her a headache.

I remember telling her to go ahead and take some aspirin now so that later we could...

Well as you may have guessed, nothing happened later that night.

Now where was I? Gears! I have to get back on the topic at hand. Is it a game that men and women can both enjoy playing together? My wife and I think so. But why do each of us like it?

From my perspective its easy to see why the game is so fun. Its got guns and blood and guns with chainsaws and... more guns. Its got a decent story and the mechanics of the game like the cover system are excellent. Plus there's Anya. Whenever she is on-screen I always say "Hi" to her and sometimes when she talks I will say something crude and I usually get an elbow to the ribs from my wife.

My wife says she likes playing it because she gets to come to my rescue when I um, get taken down trying to protect him. I mean her. She also said the graphics were "pretty" and "Its like playing an action movie." She says her biggest reason for playing is that she gets to spend more time with me. (Awwwwww.) By the way, she told me not to mention this because it kind of goes against her hard-ass style so please don't tell on me.

So far we have played all the way through the co-op campaign at least four times. We had decided to go back and get all the COGs in the game and after I got to the end of the game I realized that I only had 29 of them. I admit that I used a guide to find a couple of them like the one under that desk. I would never have found that one on my own.

We tried to go back over the list and when we couldn't figure out which one we had missed, she smiled and said, "Well we will just have to start over from the beginning." So we did and finally after finding one near the end of the game that I could swear I had found before, the little achievement window popped up. It only popped up once though. My wife asked why she didn't get the same thing I did so I told her to check to see how many COGs she had. She checked and of course she had...

This Co-Op Couples Article was written by Co-Optimus member Brainp0wa.

Interested in writing a co-op couples story?  Send us an email!