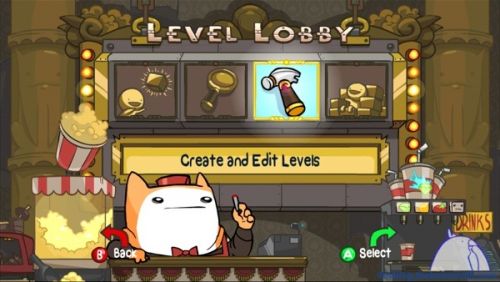 We first played The Bethemoth's BattleBlock Theater way back at PAX East 2011, seems like ages ago. While the campaign mode and many of the challenges are cooperative, The Behemoth actually prefers the term "co-optional", as screwing with your friends is just as important to the game as working with them. For instance: need to get across a pit of spikes? Chuck your unsuspecting friend into it and use their corpse as a platform, of course!

This year, rather than give the campaign levels another go, we were treated to a hands-off demonstration of the  level editor. The Behemoth tell us that it's basically the same tool they've been using to create BattleBlock Theater's levels, and after what we saw, I came away impressed. Unlike the daunting task of creating a level in a game like LittleBigPlanet, the toolset The Behemoth have come up with is simple. After setting how wide and tall a level will be, building a level is as simple as choosing a block type or enemy and dropping them onto the grid. For super-fast level creation, tools to create doubled or even quadrupled layouts (affectionately referred to as The Quad) exist. Toss in a spawn point, an exit point and at least 3 gems (to activate the exit) and you've got a level. Various machines, switches, enemies and even a basketball hoop can be dropped into your level, and you can even mix and match different game modes to be active at once. We witnessed the creation of a competitive level where players had to grab gold nuggets spat out by a flying creature and deposit them into a flying safe, all while avoiding having their gold stolen by other players AND playing a game of basketball. It was pure craziness and I loved it.

Using the editor, players can create playlists of up to 15 levels, upload them, and share them with their friends. Playlists can be any combination of levels and modes, and I fully expect people to create miniature campaigns, and since the level editor can also be played in co-op, making a game out of level creation will likely prove popular. Uploaded levels will be moderated, so hopefully we won't be subjected to too many pixelated penises.

We were also shown the way you unlock collectibles in-game: via vending machine. Your rewards appear to come from certain categories, but popping gems (the game's currency) into each machine unlocks a random doodad for your characters. A trading system is in place to let players gift or trade items, which is a nice improvement over the weapon unlocks in Castle Crashers. It also serves to increase player interaction, which we never discourage.

After our level editor demo, Art Director Dan Paladin took a couple minutes to chat with us about BattleBlock Theater:

Note: The images in this story are watermarked, but were provided to us by The Behemoth.