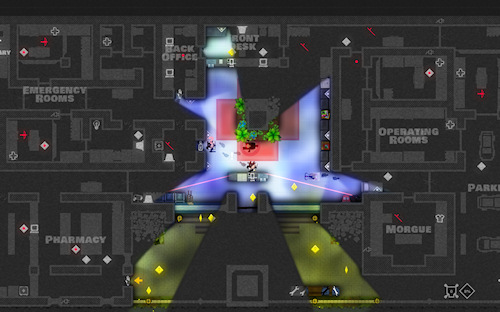 It sure seems like we've been talking about Monaco around these parts for a long time, and we have! The first time we put hands-on with the game was shortly after PAX '10, which might as well be an eternity ago. The good news is that Monaco is almost done, and creator Andy Schatz couldn't be happier.

It had been a while since I'd played Monaco, so the first thing I noticed was all of the fit and finish that the game had received as of late - proper campaign menus now exist, mission briefings, and even the stylized animation of all of the player characters and NPCs look great. While it as a little hard to hear on the show floor, the music (provided by Austin Wintory of Journey fame) sounded great.

Andrew and I sat down to play some local co-op in one of the early missions - our ragtag crew of misfit thieves needed to steal a passport. I chose the Hacker class, whose ability to manipulate electronics and computers is second to none, and he chose the Lookout who has the unique ability to track guards out of your immediate line-of-sight.

While I handled the security systems and desperately tried to wrangle Andrew around the level (he seemed to think Monaco was more of a tourism sim), we somehow managed to make it to the top floor of the office and steal the passport, which promptly got Andrew killed. I revived him and we hauled our butts out of there as fast as you can say "The Italian Job".

While Monaco supports both online and offline co-op for up to 4 players, I'm certain that it's going to be one of the best local co-op games in some time. Monaco was high on my list of games to see at PAX. It seems that everyone and their sister has seen the top-down indie title. I literally knew nothing about it, other than everyone that has talked to be about video games, ever, had played the thing. I asked what all the fuss was about, and Mike plainly said to me, “You go on heists.” Wait, what?  I thought it was a music game. Say no more. Let’s play this mamma jamma.

I won’t talk too much about the uniquely animated art style, or the suspense building music, or even the intricacy of the level design. I got the vibe of a top-down puzzler/action game that is well represented by and simple yet abstract art style. I will say it was one of the best gaming experiences I had at PAX. Mike and I started up a game.

As is often the case, I had no idea what i was doing. I chose the Lookout character, allowing myself and the team to see more of the level. The controls were intuitive and I quickly began helping the team by using the Lookout’s unique ability, which was, well, looking at things. My character had a longer view range than other characters.. We crept around a two story installation, hacking terminals and dodging security guards. Mike had a few help hints, like, “Move to the second floor,” and “Run!” which aided in our success. My time with Monaco was short, but I’ll definitely be picking it up when it’s done.

Locke Interviews Andy Schatz (while everyone else stands just off-screen)

There's no release date set for Monaco just yet, but I'd expect it sooner rather than later. Looking for more info? Want to hear the history of Monaco in more detail? Check out Episode 53 of the Co-Opticast, where Nick and I interview Andy way back in 2010!