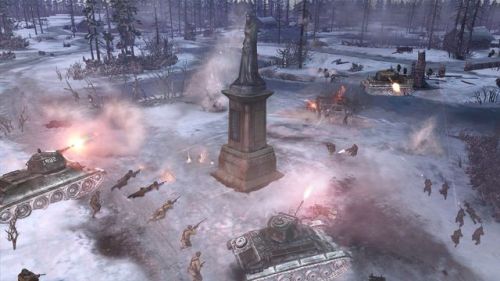 There's only one Company of Heroes game (technically an expansion) that had co-op, and that's Company of Heroes: Tales of Valor.  But given the opportunity to see Company of Heroes 2 at PAX I had to jump at the chance.  I'm a huge fan of the series which has been developed by Relic, creators of Homeworld, Dawn of War 2, and many other amazing real time strategy games.

Company of Heroes 2 is the first game to be considered a true sequel in the series and it shifts focus from World War 2's battles on Europe's Western fronts and moves them East as Nazi Germany takes on Soviet Russia.  This means you'll be fighting a war on the frozen tundra and forrests of Eastern Europe and the weather that surrounds that plays a huge part in how the game plays out.

Coldtech is what Relic is calling the system - it governs gameplay for all infantry units within a mission.  If left out alone, units can freeze to death (noted by a little thermometer above their heads) - making it crucial that you build fires, take shelter in buildings, or better yet - just burn a building for fire.  The snowy maps we played features dynamic weather which can completely alter the course of battle - a surprise blizzard is not uncommon and you're troops will want to hunker into cover to avoid having the cold take over.  As the snow builds, their movement slows as you see the units try to trudge through the snow drifts. The weather though doesn't just affect infantry, it affects the game world as well.  Lakes and rivers are frozen in many maps, making them drivable and walkable by your squads, but ice is fragile and it can break.  In one mission I forgot I left a tank in the middle of a lake on frozen ground, only to have it assaulted by a mortar team - into the depths it plunged.  A little while later, the hole it left was frozen up again over its watery grave.

Company of Heroes 2 definitely kicks the realism up a notch, not only in the weather, but the way it handles what is visible to the player.  While a general "fog of war" is still present, it's no longer governed by a radius coming off of your units.  Instead what is being dubbed as "true sight" determines what units you can see.  Every unit has a line of sight and a distance, whatever they see is what you see.  Sight can be blocked by trees, buildings, and even smoke - allowing you to cover flanking maneuvers or retreats without being seen by the enemy.

We only checked out two missions, but players of the series should be right at home.  The one thing that is very, very different is the strategy required.  Coldtech forces you to rethink when you push up.  Will I have support to build fires for my troops?  Is there cover?  What if the lake cracks and splits my force in half?  I found the strategy required to assault my objectives involved a lot more weighing of variables and not just, "Do I have more guys than they have?"

Graphically the game is looking gorgeous, even this early in development.  Troops leave tracks in the snow that eventually fill back up, smoke is billowy and puffy, and fire from the flamethrowers looks especially liquid like.  The sound is also standout, which should come as no surprise, the original game won countless awards for its sound design.

Finally we come to co-op.  There's no confirmed co-op yet, but the first campaign mission I played I was given an "AI Computer player" that controlled another base and their own set of units.  Obviously I pushed the question over and over - but was repeatedly given the - "we're not talking about that yet."  From what I saw it appears as though the game will support co-op through the campaign.

Company of Heroes 2 is shaping up to be one of the most realitistic RTS games I've seen to date.  We're keeping our fingers crossed for co-op play, but as of now, it's completely unconfirmed.  It'll be out next year on the PC. How do you improve on the best strategy game ever made? That was the question that I asked myself over and over as I sat in front of Company of Heroes 2 at PAX. All I can say is that there is a reason that Relic has taken six years to develop the sequel to Company of Heroes and without repeating what Nick has covered above, they have managed to add even more layers of depth to a game that was already top of its class.  I was honestly giddy when I learned how to use the Truesight and Coldtech systems to my advantage. Even though we only played an alpha build, the game was doing things I couldn't imagine were possible in a strategy game.

You're not going to find the twitchy play or massive armies of Starcraft here, because Company of Heroes 2 is on the opposite end of the spectrum. Hyperbole aside, there is a beauty to the pace of a Relic-driven strategy game and this was reinforced by the two missions we were privy to last weekend. It took a little time to remember how to play, but once I had ordered a couple units around in the first mission everything came back to me. The Russian army played very similar to the Americans in the orginal, with a couple changes to the Elite riflemen that make them very versatile and ultra-resistent to the harsh weather of the Eastern front. The second mission was a 2v2 skirmish that was begging for co-op, but unfortunately Nick and I had to partner with an AI teammate.

As you can tell, I'm super stoked for the game and from the limited time with it I can assure you that Relic knows what they are doing. From what I have seen, they are taking everything that worked in the first game and building on it in a way that allows for a more dynamic battle. Die hard fans will find familiarity, and new players are in for a treat. Company of Heroes 2 still has some time in the oven, but it made me feel like I was back in my university days, hunched over the keyboard trying to outthink my opponent.