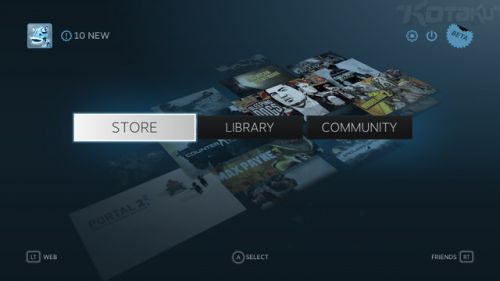 Steam's Big Picture Mode has long been talked about as Valve's first attempt at a living room console.  It's Valve's take on bringing PC gaming to the living room by providing a Steam interface that is gamepad and TV friendly.  Let's face it, today it's easier than ever to hook your PC up to your giant HDTV in your living room thanks to the HDMI standard, but you have to trudge along a keyboard and mouse to navigate your way around it.  Today, you'll get a chance to try something better using Steam.

Kotaku is a pretty in-depth preview of what you'll be seeing in Big Picture Mode.  It's an interface that looks like a much...MUCH cleaner Xbox 360 dashboard.  Even the button overlays are built for the 360 controller, bringing it one step closer to familiarity.  The on screen keyboard is incredibly interesting and it's definitely something we have to wonder why nobody has tried before.  I've seen some dual analog stick keyboards that are similar, so perhaps Valve's change will push Sony and Microsoft to ditch the horrible on screen QWERTY and other equivalents. The good news for co-op gamers is now couch co-op gaming on the PC is going to be much, much easier.  Perhaps this will push some folks to finally move the PC from the office to the living room (or at least run another cable) and you can check out some great couch co-op PC titles.

While many will herald this as the first step towards a Steam console, or the death of console gaming, there's still a ways to go.  Namely price of entry.  If anything, it gives PC gamers options.  And at the end of a console life cycle, this could create long time converts.  Only time will tell, lets just hope its not "Valve Time."