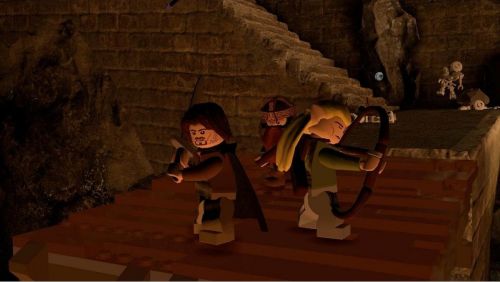 As the first in the highly anticipated series of movies based on Tolkien's The Hobbit approaches, so too does the marketing onslaught, like a horde or orcs and goblins invading the land. Later this fall, a video game tie in, LEGO Lord of the Rings, is headed to your Xbox 360, PS3, or Wii. Frodo, Gandalf, and the rest of the game look suitably adorable in glorious animated LEGO form.

As the LEGO series has aged, it has also matured, and the most recent games have been particularly delightful. One of the best features of LEGO Batman 2 was the expansive hub "world" of Gotham City. LEGO LotR promises to allow players the freedom to "explore all of the open-world of Middle-earth". Hopefully, this means something more akin to the enormous city of Gotham than the more tightly controlled hubs of previous LEGO titles.

A few other details have come to light, as well. A crafting system, where players can visit blacksmiths to create Mithril goodies, will be in place. A roster of no less than eighty characters should keep completists busy for quite a while. Like Sauron, we'll certainly be keeping a close eye on the hobbits as LEGO Lord of the Rings heads our way.